Alone, and targeted on an isolated farm, 12 year old Henry finds himself at the center of a maelstrom of terror, and a dark family legacy, when his secretive grandfather dies suddenly in the night.

Knuckleball is director Michael Peterson’s first feature length foray into the horror genre. It is a huge improvement over his previous feature Lloyd the Conqueror, and works very well for a genre movie, with intense atmosphere throughout, some inventive scenes involving traps, even if more such scenes could have elevated the film to be a true classic in the genre.

The plot tells the story of a young boy being left with his grandfather in the country while his parents travel to a funeral elsewhere. Soon, the visit turn into a gruesome story of trying to survive a home invasion, from a deranged maniac, laying traps and uncovering some terrible secrets about the family’s past.

Plotwise, the story draws many storybeats from Home Alone, with the boys parents having left him on his own, but then sensing something is wrong and hurrying back, while the boy is desperately fighting to protect himself and his home, by building death traps from whatever is lying around the grandfather’s home. However, the storyline has been transplanted into the horror genre, and as such, the violence is somewhat more gruesome, and the implications of what will happen if he doesn’t stop the intruder places the stakes much higher and really helps to bring the tension up.

About halfway through the movie, things take a turn for the darker, and the movie shifts the focus away from trap building towards exploring the backstory of the setting. Unlike many similar genre film, Knuckleduster manage to set up every plotline in advance without breaking the pacing. That said, having the inventive death traps in the first half of the movie does put a damper on what is probably the most enjoyable part of the film. Sure the story is effective in its own way, but the film is based around a gimmick that could be taken further to great effect. Sadly it ends up feeling like the latter half of the film was just a bit less fun for that reason.

The film does falter to a few clichés towards the end which further hampers the enjoyment that was derived from the central gimmick of the movie, and seem to be mostly included because that is what is expected from such films.

That said, Knuckleball is a very serviceable film, and a coherent and enjoyable horror flick from first-time horror director Michael Peterson. I recommend it to any fan of the genre.

A special quick note: Knuckleball takes place in the present day, and not only cleverly manages to deal with smart-phones in a way that does not feel contrived and immersion breaking. It is also interestingly done from a visual standpoint, and is worth checking out for anything dealing with similar issues in their film-making. 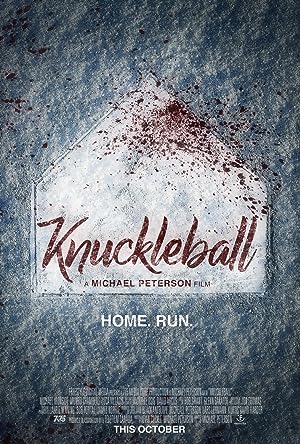 Be the first to review “Knuckleball 2018” Cancel reply