The princess Anastasia is cursed by the witch Carabosse to die but three teenage fairies change it and the girl falls into a deep sleep for one hundred years to wake-up as a sixteen year-old teenager. Along her dream, Anastasia takes a ghost train and is adopted by a woman that lives in the woods with her son Peter that becomes her stepbrother. Soon Peter is seduced by the Snow Queen and leaves home with her. Anastasia seeks him out and travels through the kingdom of albino King and Queen that offer her a stagecoach to help her to travel. However Anastasia is attacked by gypsy bandits that kidnap her, but she befriends a gypsy girl that offers a magic animal to ride in her quest. Out of the blue, the sixteen year-old Anastasia is awaken by Peter’s grandson Johan.

Putting a finger on Sleeping Beauty is difficult. It was first published by Charles Perrault in 1697, from a story by Giambattista Basile. I was re-imagined by Walt Disney in the most popular version. However, the true version is much darker and approaches a horror story. Maybe children of an earlier time were not so protected.

Breillat puts her own stamp on the story, bringing back closer to it’s roots. She even mashes it with Hans Christian Andersen’s The Snow Queen.

As Sleeping Beauty (Carla Besnaïnou) wanders in a dream state, she is exposed to various traumas regarding love and loss. She develops socially, psychologically, and sexually to take her place in the world when she awakens 100 years later at 16 (Julia Artamonov). It is sometimes difficult for those who grew up on Disney, but the time invested is well worth it.

Breillat has now completed two of her fairy tale trilogy films. Bluebeard was first, and we anxiously await her interpretation of Beauty and the Beast. 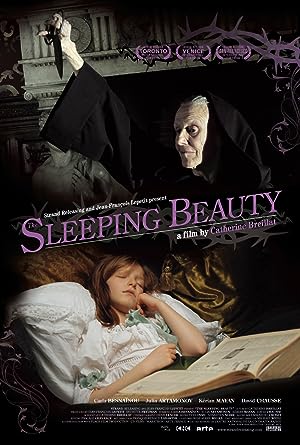