Igor–a 15-year-old apprentice mechanic–spends his off hours at the beck and call of his father. Igor’s father, Roger, is a low-life involved with smuggling undocumented immigrants into Belgium, and acts as their slumlord, housing them in barely livable conditions, and paying them menial wages to work construction on his building (among other scams). When the building inspector pays a surprise visit and Amidou falls off a scaffold in his hurry to hide, things start to unravel, particularly when Igor makes a promise to the injured Amidou that ultimately exposes the different values of Igor and Roger, and of Amidou’s wife, Assita.

After ten years of directing documentaries the Dardenne brothers directed their first fictional film, Falsch (1987). In 1992 they finished their second one, Je pense à vous (I Think About You) which they didn’t think as a good film. After four years, came their first real “Dardenne-film” The Promise. It was the first film where they found their own unique style. The Promise is a story of a father son relationship, which they had already dealt with in Falsch.

Roger (Olivier Gourmet), with his 15-year-old son Igor (Jérémie Renier), drives across industrial Belgium to get illegal immigrants from a truck. They bring them back to a block of flats they live in and start charging them for money. One of the immigrants is Assita who has come to Belgium with her husband to find a better future for them and their baby. One day when immigrant-inspectors pay a visit events start to have radical consequences.

The films by the Dardenne brothers usually focus on the moral choices the characters have to make and what are the consequences. In The Promise Igor has to decide, whether to obey his father or to do what’s right and help Assita. Then we get to the question what is the right thing to do? And this is what Luc & Jean-Pierre Dardenne want to do: let us observe and think. Luc Dardenne has said that the basic idea of film-making is to reconstruct new humane experiences. The Promise makes one think about these moral dilemmas and social issues but also associate the events with one’s own life.

Geographically Belgium is in between of Germany and France – Belgium is only a country for trespassing. For instance a harsh example; Hitler in WWII. This is the main theme of The Promise – it is a story of trespassing. For Assita Belgium is a metaphor of a certain state in life, which she is just passing by. No one stays in Belgium (or in that state of life).

As is Assita in between of two worlds; her home country and Belgium, so is Igor. Igor feels himself grown-up when he’s collecting taxes for his father and driving around Belgium. But on the other hand he’s full of juvenile joy as he drives with his friends on a go-kart. Igor was played by Jérémie Renier (L ‘Enfant, Lorna’s Silence). It was his first role and through that he brought a realistic life to the character who tries to free himself from the chains of his father – the brothers have always appreciated the idea of using amateur actors. Igor’s father, Roger was played by the Golden Palm-winner Olivier Gourmet, who is in my opinion a very talented actor. He gives a great life to Roger, whose world is worthless and merciless.

The Dardenne brothers were raised in an industrial town in Belgium, which is the milieu in all of their films. The sound scape is something that one should pay attention to. There’s no musical score at all only the voices the characters hear, the voices of an industrial town – ambiance. In the end the industrial voices just keep going on as the credits come on the screen. It’s like we can’t handle them anymore, they’re spreading off the screen. A bit like in Chaplin’s City Lights.

The minimalist style of The Promise is amazing. It’s touching on a new level. The brothers have totally succeed in their mission to create new humane experiences. Luc Dardenne writes in his ‘diary’ Behind Our Pictures, that the more you take material away the closer you get to the humane emotions, which he achieves through the severe aesthetics, minimalism and ruthless sound scape.

Faces are in an important role, when describing humane emotions in The Promise the faces have also a dramaturgical role. I’m going to quote Luc Dardenne here, translated in English: “In every scene with Igor and Assita where they look to each other, Igor is always the first to turn his head away. Igor isn’t able to meet Assita’s eyes, because he senses a moral command that he cannot reply. Except in the final scene.” And what a redemption it is in the end. The meaning of facial expressions and the philosophy behind it comes from a French philosopher Emmanuel Lévinas, who both of the brothers admire and from whom they get background for their philosophy of film.

The Promise is thinking – philosophy of film. The brothers have stabilized film as an instrument for philosophy. I hope that the true film fanatics get to see this and appreciate it as much as I do. In addition to its themes of change, father-son relationship and trespassing, The Promise challenges the viewer to think on its own. The brothers force us to meet the moral choices out there. 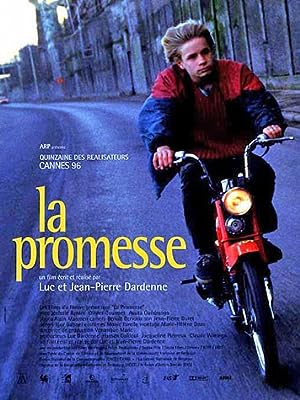