Annecy is no tourist destination for three working-class Algerian brothers and their father, in the months after their mother has died. Marc is deeply troubled: he tries to stiff drug dealers and then plots revenge. Christophe is released from jail, lands a job, and must overcome various temptations in order to keep it. Olivier, nearing 18, may be falling in love with Hicham, a young man who constantly practices capoeira on the shores of the lake. Both violence and fraternity are close to the surface of most interactions. How each brother emerges from his challenge comprises the film’s drama. Is there any way in which these men can be a family?

Gaël Morel (Wild Reeds, Under Another Sky, Full Speed) seems to continue to test cinematic minefields and while not every film is a success, they each indicate that there is a reservoir of talent in this writer/actor/director that will eventually galvanize into to a significant voice. This much maligned little tale ‘Le Clan’ (oddly but in the end appropriately titled in English ‘Three Dancing Slaves’) has more going for it than most audiences acknowledge: for all its weakness there are some very sensitive moments about father/son relationships, filial love, romantic love, racism, bigotry, and the ever-growing dysfunctional family problem.

Three brothers live with their recently widowed father in a small town near the Alps in France. Marc (Nicolas Cazalé) is a rebellious youth, into drugs and petty crime and at constant contention with his overbearing father (Bruno Lochet); Christophe (Stéphane Rideau) is recently released from prison and is trying to live straight by starting from the bottom in a pork factory and working his way to the top; Olivier (Thomas Dumerchez) is the youngest and though tattooed and quasi-rebellious is the sensitive one whose gender issues are just beginning to focus. The film is told in three versions, one by each brother, and from these segments we paste together a family disrupted and needy. Marc fights and performs dangerous deeds, Christophe struggles to re-create his broken life, and Olivier finds love and passion with Hicham (Salim Kechiouche), Marc’s friend, who is North African and repeatedly dances the capoeira, a slave dance, for his own expression and his need to connect with Olivier. Despite the differences in these young men there are repeated encounters that signify their bonding. One quiet scene shows the father awake, sitting and watching the troubled sons asleep, naked, entwined in each other’s bodies: it should be clipped for a still shot as it is very beautiful.

There really is little resolution of an overall story; these three short stories simply end in their own fashion and the interlocking meaning is left to the viewer. Each brother is a ‘slave’ in his own manner. Yes, there are moments of violence, a pitiful animal abuse scene, and gaps in dialogue that bump the film around in a clumsy fashion, but look for the little moments of visual beauty and the movie takes on different meaning. In French with English subtitles. Grady Harp 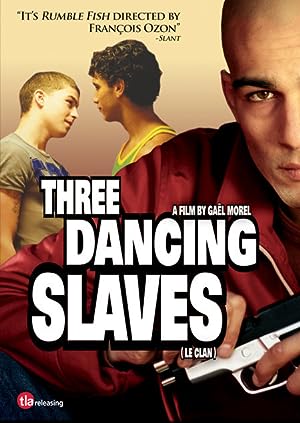