Malik has a lot on his plate when he returns home to Tunisia after living in France. He’s processing his father’s death, he can’t come out to his mother, and his childhood anxieties have resurfaced. But all of Malik’s problems seem to fade away when he falls for Bilal, the dreamy houseboy at his mother’s bourgeois estate.

Social and religious contradictions, gay/lesbian secrecy, and all this in an Islamic/Arab country – plenty of intriguing stuff to issue from and complete with. True, it is difficult to fit it all in a film less than 1.5 hours, and that is probably the reason why the film seemed a lightweight walk over the issues, with the director’s apparent desire of being brave and progressive, but not too provoking in showing love and affection (Mehdi Ben Attia comes from Tunisia where the film is shot). The second half or so is less interesting and even more perfunctory, and the ending is rather odd, characteristic to Bollywood films rather than French creations.

The aged Claudia Cardinale has somehow lost her charm, and all other performers did not impress me much; I did not fix them in my memory, and their accomplishments did not make me look for films with their presence…

Thus, just an average film to me, 1-2 additional points for boldness and pleasant Tunesian scenes – not often shown in films widely available in the Western world. As for gay films, you might want to see respective German and Scandinavian films with meaty approach. 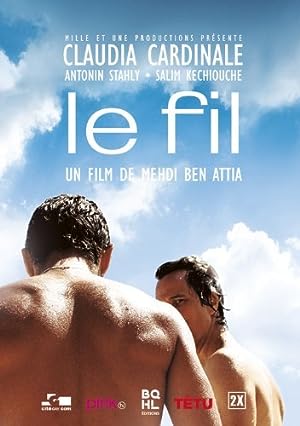 The String (2009)
93 min|Drama, Romance|12 May 2010
6.8Rating: 6.8 / 10 from 1,716 users
Malik has a lot on his plate when he returns home to Tunisia after living in France. He's processing his father's death, he can't come out to his mother, and his childhood anxieties have …
Director: Mehdi Ben Attia
Creator: Mehdi Ben Attia (screenplay), Olivier Laneurie (screenplay)
Actors: Claudia Cardinale, Antonin Stahly Viswanadhan, Salim Kechiouche, Driss Ramdi