Louis, a nine-year-old boy from Paris, spends his summer vacation in a small town in Brittany. His mother Claire has lodged him with her girlfriend Marcelle and her husband Pelo while she’s having her second baby. There Louis makes friends with Martine, the ten-year-old girl next door, and learns from her about life.

To me, this is really a SUPERB movie from France even though there is no superstar like Alain Delon or Romy Schneider appearing in this film.(Note: Up to now, the actor Richard Bohringer who appeared in this film has already become famous but many people still do not consider him as a superstar of France movies like Alain Delon)….Yes, this is a children film for adults (but children themselves may still be allowed to view SOME certain parts of this film instead of the whole film). I extremely like the innocent performance of Antoine Hubert (Louis) and especially, the smart and funny performance of Vanessa Guedj (Martine). Besides, the performances of Anemone (Marcelle) and Richard Bohringer (Pello) are also emotional. The movie was beautifully filmed with romantic sceneries of rural France, and its soft music is wonderful. Altogether, these factors made this movie win the hearts of many audiences, including me. A MUST-SEE FILM this “Le Grand Chemin” is ! 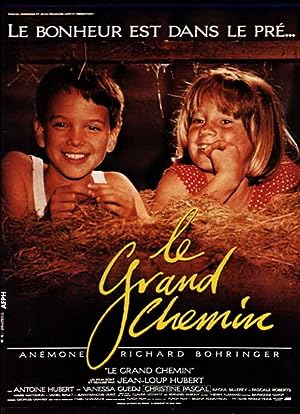