A violent teen and three others kidnap a young nurse while escaping from a Texas mental institution. Pursued by a vengeful sheriff, the disturbed young man embarks on a murderous rampage that shapes him into a legendary killer known as Leather face.

This movie in itself is not exactly bad. It looks alright, has some OK gore, decent acting for the most part, some slightly interesting characters. It doesn’t suck. But as a origin story to one of horror’s biggest icons? Eeeh, yeah. It’s not great.

Actually, right off the bat the biggest problem with this movie strikes me. When you’re making an origin story to such a famous character, you should make sure that the story you make up and make into a movie is really awesome. Unfortunately, it’s not. We see Leatherface’s family and stuff, and it’s just meh. The opening scene is just not very interesting. What follows though, isn’t bad. They have some kind of story to tell here, not relying too much on TCM- lore, and I thought it was somewhat entertaining.

You wouldn’t have to cut a lot here to make this movie totally unrecognizable as a Leaterface origin-story, though. That’s a shame. And it’s also pretty tame, I’m sorry to say. Actually really tame. Like I said initially, the origin story to such a gruesome character should really be a lot more horrific, gruesome and ghastly. It’s not. It’s pretty watered down. I think the die hard fans of Leatherface will be disappointed with this. But who knows, I may be wrong. 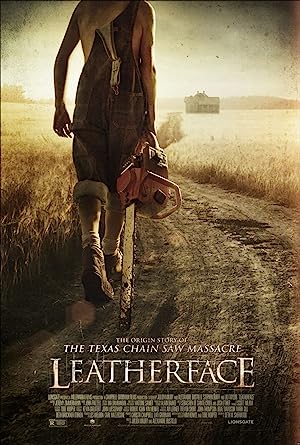 Leatherface (2017)
90 min|Crime, Horror, Thriller|14 Sep 2017
5.0Rating: 5.0 / 10 from 16,133 users
A teenage Leatherface escapes from a mental hospital with three other inmates, kidnapping a young nurse and taking her on a road trip from hell, while being pursued by a lawman out for revenge.
Director: Alexandre Bustillo, Julien Maury
Creator: Kim Henkel (based on characters created by), Tobe Hooper (based on characters created by), Seth M. Sherwood (screenplay by)
Actors: Stephen Dorff, Lili Taylor, Sam Strike, Vanessa Grasse

Be the first to review “Leatherface 2017” Cancel reply