A ten-year-old boy feels unwanted when his mother places him in a home for wayward children. He goes to a foster home where a family of workers finds him to be too much for them. When the unruly child discovers the family plans to give up on him, he kills their daughter’s cat in retaliation. He is sent to another home where he is cared for by an elderly couple. The boy takes to the wife’s elderly mother, who reaches out to the disturbed boy. His deliberate disobedience lessens somewhat in his new environment, but he is arrested after throwing bolts at cars from a bridge. The boy tries to overcome his mother’s rejection and struggles to boost his self-image in this childhood drama.

Well… Les 400 coups has been placed at no. 140 in IMDb’s list of all-time great films, and as much as I admire Francois Truffaut’s work, I am more impressed by L’Enfance nue, Pialat’s first film, made when he was 43. Owing to the vagaries of the distribution system, I never saw it when it first appeared, and am now able to write about it thanks to TFO’s enlightened film series.

Pialat was a realist, maybe to the point of turning off his audiences. If you have seen A nos amours or Loulou, you know you’re in for a gruelling experience. Actors pushed to the breaking point, cutting that puts you right in the action, without any establishing background. The scene between Francois and Raoul, where the latter gets out of bed to look for Francois, then the knife slams into the door, just missing Raoul’s head by inches, is unforgettable.

The actors are mostly amateurs; they do not try to attract your attention with gestures or speech, they just settle in and tell the story. The “assistance publique” workers are sympathetically rendered: there’s no hint of Pialat trying to settle scores with government agencies (cf Une si jolie petite plage). The Minguet family, the second one we see–how many have there been in all?–is beautifully drawn. Just to watch Madame bringing soup to Meme, arranging the clothes, the napkin, it’s a marvel of observation. The story hinges on Francois, of course, and his performance is angry, violent, joyous, destructive–he’s Pialat’s alter ego, I can’t help but feel. 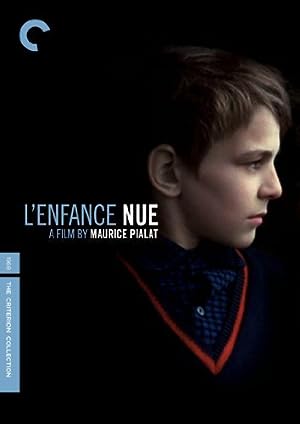 L'Enfance Nue (1968)
83 min|Drama|22 Jan 1969
7.6Rating: 7.6 / 10 from 1,812 users
An anguished foster child takes to mischief and lies as his foster parents do their best to love and care for him. But it might be too little, too late in this emotionally devastating portrayal of the orphaned child.
Director: Maurice Pialat
Creator: Arlette Langmann, Maurice Pialat
Actors: Michel Terrazon, Linda Gutenberg, Raoul Billerey, Pierrette Deplanque