A drama set at a Swiss ski resort and centered on a boy who supports his sister by stealing from wealthy guests.

Some films just can’t be improved, this is one of this rare class. Like Lorna’s Silence and of course the Dardenne bros, we’ve got the sociological view of the poor and alone among the rich and powerful. This alone is better than most of what is filmed, but what makes this gem stand from the crowd? The story is powerful, never faltering, and yet without low blows. And with the classic “slow/ ethnographic” moments that have make “French film” famous or infamous, according to tastes :).

Simon steals the movie, and that’s no small feat given the other main character is Léa Seydoux, probably too pretty for the role, but so well “dressed” and such a good actress that you almost never see in her the “Cannes Star” one is expecting, only a beautiful woman who happens to be poor and with an awful taste for men.

“Mike”, “Christin” (the classy blonde) and J. F. Stévenin’s baddie teach us in one lesson that whoever’s got money or power, even if just a bit more than you, will probably humiliate you as soon as he/ she can.

This is a film probably only understandable for those of us who’ve been thou hard times, economically as well as socially (notice Louise and Simon have no friends, S. may have one client and then an unlikely sidekick, and Louise has her “men” but they have no social life, no “life” beyond “pasta and toilet paper” as Simon wryly says to Mike as to what he does with the $ he gets from his thefts.

Simon has some points in common with Truffaut’s 400 blows, as Argentine critic Diego Battle aptly writes. He’s so chillingly natural that we only hope he can be as good as J.-P. Léaud, or even better!

Léa, from “La vie d’Adéle” (Palme d’or at Cannes 2013′) has a feline beauty as well as some “hidden anger” that suits our character perfectly. I never understood how she spends her money so quickly, as we may understand she gets money from hustling, also from Simon, and yet she’s always broke.

Agnès Godard makes magic with the greyish-white Alpine settings, always showing how harsh weather may be warm compared with the people down there. You may not be eager to go to skiing after having watched this masterpiece!

John Parish’s music is hypnotic and costume design are perfect. Everything in their house is ugly, like poor Simon’s tacky bed sheets. (This reminds me of Lorna’s silence, whose winter clothing always looked bad on her, herself a beautiful woman). Even when they but something brand new, it doesn’t work as supposed, like the oven Simon wanted. Everything that enter the house sort of gets “soiled”. They are always washing clothes.

The ending’s got a clear symbolism, I owe this to IMDb reviewer Dan Frazen. My favourite scene is Simon and his young apprentice stealing kid’s wallets, leaving aside the toys with cool efficiency, complaining when “they only have coins” and flushing all what they don’t want down the toilet.

I’m eager to watch Ursula Meier’s debut, “Home”. I am sure she’ll keep up the greatness. 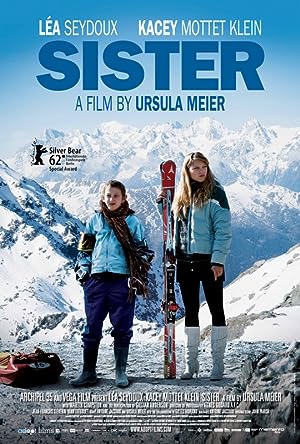