September 1960: on a purely punitive basis, eight scouts must climb the solid mass of Brévent to 2500 meters of altitude. The so beautiful and so majestic mountain which draws up face them very quickly reveals dangerous. All the techniques of orientation learned at the scouts will do nothing there. The teenagers find themselves delivered to themselves. Lost in the abrupt throats, the eight boys are confronted cold, with the hunger and the fear. A tension starts to reign between these young people of different origins and of which concerns divergent: some worry for Algeria, for a brother left to the combat, or a family threatened of expulsion in metropolis, still the girls worry to like others. The group divides then to find an exit, but one of them disappears in water frozen from a torrent. While young people try to protect itself in a closed down refuge, the others will seek the helps..

France 1960:Charles De Gaulle had been ruling the country for two years (see the sequence in the cinema);the “Nouveau Franc ” had just happened(but they ‘d still got the good old “Cent Sous ” coins which the brats put on the tracks before the train comes ;Brigitte Bardot continued to fascinate the crowds (extract from “Et Dieu Créa La Femme”:it was however a NC-18 film But the youngsters managed);and ” Les 400 Coups” is next week’s movie.

There’s a darker side to 1960:the Algeria war was not yet over (it would take two more years) and a newspaper reads ” eight soldiers were killed in an ambush “1960,it’s mostly that.

“Les Aiguilles Rouges” is some kind of updated “war of the buttons “;eight teenagers go for a hike .Against all odds,in those magnificent mountain landscapes ,it’s not your idea of fun:they do not get on very well,some of them have already experimented tragedy (death of a father,a brother drafted in a dirty war…)Like in “La Guerre Des Boutons,and although the screenplays are completely different,these teenagers don’t seem to trust the grown ups anymore :the best scene is the young boy reading a letter from his conscript brother and crying “if I told you what they forced him to do!”.And it seems that this misunderstanding extends to the teenagers ‘ relationships.

It was not a big success in France ;I would not be surprised if it became a sleeper. 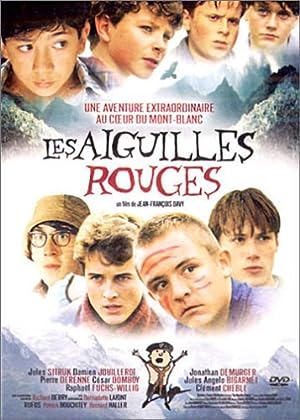