The siblings Joseph and Chloé are 12 and have just been placed on another children’s home. For years they were on the same or separate homes or on the run together. Chloé is an autist. She does not talk, feels panic when touched, and eats only when told so. Joseph dearly loves her and firmly thinks she needs him. The child psychiatrist agrees that he has a very positive influence. Joseph dreams that Chloé will recover if they find their parents. The psychiatrist finds the mother. But she is also an autist. When the children were one year old she left them on the street just from an impulse. This is the first crack of Joseph’s dream. The children escape from this home. When they are caught next time Chloé is send to a mental hospital. The same thing is about to happen to Joseph after a suicidal attempt in the police arrest. Because of his friendship with the gang leader lots of children liberate him on the way. With much violence they also liberate Chloé. Eventually Joseph will have …

To Karl, who practically took a swing at the director of this fabulous film, honestly you have no idea.

Please do tell me why this film was so bad? I found it inspiring and uplifting in a sense. I myself have an autistic brother and your dreadful use of the word “feral” was quite offensive.

To say it was one of the worst films you have ever seen is a complete utter joke. The director and actors have put countless hours into this film and the intriguing storyline was moving. Many movies out there either have no storyline or lack of effort in not only the directing of the film but the lack of professionalism on the actors behalf.

Again, I think you need to look at this film from a different angle as it seems you have only looked at it from a selfish point of view.

For the record, I thought it was an astounding film, absolutely magnificent performances by Vincent and Adele. Top work! 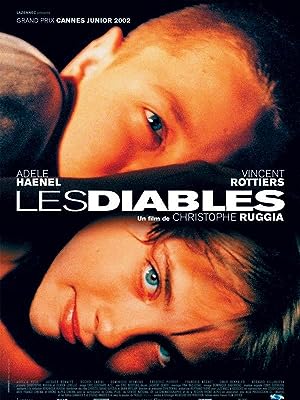 The Devils (2002)
105 min|Drama|11 Sep 2002
7.3Rating: 7.3 / 10 from 929 users
The siblings Joseph and Chloé are 12 and have just been placed on another children's home. For years they were on the same or separate homes or on the run together. Chloé is an autist. She …
Director: Christophe Ruggia
Creator: Olivier Lorelle, Christophe Ruggia
Actors: Adèle Haenel, Vincent Rottiers, Rochdy Labidi, Jacques Bonnaffé