In the backdrop of the Nazi occupation of France, taken to the hospital for a broken leg from an accident, twelve-year-old Maurice Gutman is narrowly spared from the mass roundup that will take his family from him and leave them imprisoned in a distant death camp. At the hospital, Dr. Daviel diagnoses him with tuberculosis and imposes a long treatment, perhaps a humane ruse to prevent him from being deported. Over the course of two years, while living with the hospital staff, Maurice and eight other young boarders unforgettably experience friendship, solidarity and extraordinary courage. These are the children of luck.

July 1942. A boy is taken to the hospital of Garches for a broken leg, Maurice Gutman, 12, narrowly avoids the roundup that will take his family. At the hospital, Dr. Daviel diagnosed him with tuberculosis and imposed a long treatment. What if it was only a ruse to prevent Mauritius from being deported? Maurice and eight other young boarders will live with the hospital staff an unforgettable experience of friendship, solidarity and extraordinary courage. These are the children of luck and their story is true.

In the streets of this Paris in the colors of summer 42, some kids play this game called bones. A fight broke out and one of them tore off the yellow star of his partner. Attempted to escape, one boy pushes the other who stumbled and made a hovering flight on the stairs. Result: a broken leg! This yellow star must have reserved a fatal fate for him. His lucky star will decide otherwise because, thanks to an incredible combination of circumstances, he will avoid deportation. Maurice Grosman, whose life almost stopped at an early age, is now 86 years old.
Lately it has been a bunch of true stories that is coming out but this one I decided to see what it was about and I was a bit surprise to have a good time while watching it.The subject is difficult and sad ,and the narrative is enveloped in warmth and even humor, never sinks in sadness. To overcome both medical and racial obstacles, these children show a vitality that forces admiration and illuminates the film from beginning to end. If all these young actors shine by the authenticity of their interpretation Maurice (Matteo Perez) shine here and even steal the show. It is through Mr Clément (François Patissier), that the kids has an education his character is somewhat like Charlie Chaplin. The doctor tries to find more medicine while the kids are fed up eating the same thing everyday. You’ll see what they get through in order to survive. A dramatic comedy that is actually fun to watch despite that it is taking place during the second world war. 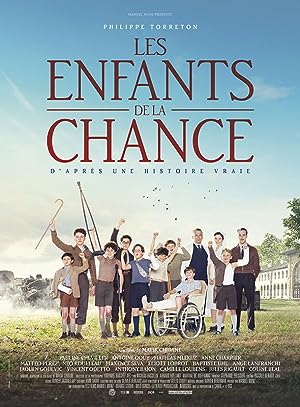