Lilja 4-ever 2002 with English Subtitles

While waiting for her mothers reply to take her to the USA, Lilya idles the time away smoking, drinking and having fun with her, too, outcast friend Volodya. In time, the chance of a new life becomes non-existent; her life is going nowhere. Meeting a young man, she then finds a plane ticket in her hand and a new life in Sweden: a job, an apartment and prospects. All is not what it seems. There shall be work, there shall be housing and there shall be no escape. This is the stark, frank and disturbing vision of the life of a young victim of the underground sex trade and in all its tone of realism of abject poverty, despicable actions and of wanting to show that dreaming of a better life is not a crime but that life can shatter the illusion of a happy ending.

Lilja 4-ever is an excellently-crafted film created by and for Swedes to help stimulate public debate and redress the issue of the vulnerability of immigrant children. It’s a cruel, enlightening, compelling watch for anyone in the West, but it’s most definitely not a movie for escapism, it’s not an After School Special, and it’s a world away from the endless contemporary assault/insult of bald neocon propaganda on Anglo-American screens.

Unless you’re very, very dead inside, Lilja 4-ever will horrify you, move you to tears, and leave you speechless…at least in its immediate aftermath. And if you are dead inside, the implicit subject is inexorable capitalist alienation and trauma, so why not catch a representation of your own inner life on film? Maybe you can work it into a drinking game.

Based on actual, turn-of-the-21st-century suicides of escaped post-Soviet child prostitutes in the suburbs of Sweden, Lilja 4-ever is a well-done drama, featuring terrific acting–especially by Oksana Akinshina and Artyom Bogucharsky. It presents moody and stark cinematography, fine script-writing, and solid direction. Lilja 4-ever is not a documentary, but its subject is relentlessly grim and real: the tragic personal results of the continued, desperate corrosion of Eastern European society and its tacit, rapaciously opportunistic exploitation in the isolated, commuter highway-bound suburbs of the West. For its success in making these links visible and cinematic, Lilja 4-ever is outstanding.

I saw Lilja 4-ever when it was released in Stockholm in 2002. You can’t watch this particular movie waiting for some good one-liners to repeat to the guys around the water cooler. You may not be able to identify with Lilja. You don’t need to feel like she could be your girlfriend. For this movie to work, and to grasp who Lilja is, you need to be able to feel human compassion, sympathy and empathy, and to recognize and appreciate the drama in our socio-economic connections. 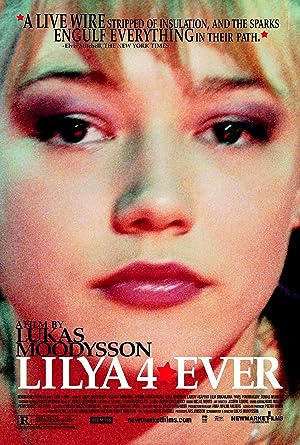 Lilya 4-Ever (2002)
109 min|Crime, Drama|23 Aug 2002
7.9Rating: 7.9 / 10 from 39,646 users
Sixteen-year-old Lilja and her only friend, the young boy Volodja, live in Estonia, fantasizing about a better life. One day, Lilja falls in love with Andrej, who is going to Sweden, and invites Lilja to come along and start a new life.
Director: Lukas Moodysson
Creator: Lukas Moodysson
Actors: Oksana Akinshina, Artyom Bogucharskiy, Lyubov Agapova, Liliya Shinkaryova

1 review for Lilja 4-ever 2002 with English Subtitles