Franck, a fit gay man, seeks love at a lakeside gay cruising beach. Among the mostly pudgy nude sunbathers, he befriends Henri, a depressed middle-aged bi-sexual who enjoys the quiet but accepts Franck’s company. When Michel appears, Franck finally spots a man he’d like to know sexually. Unfortunately, he also spots him drowning his gay lover but opts not to tell anyone in order to consider having a relationship with this handsome yet remorseless killer.

What drives people to engage in self-destructive behavior? Why do people seek out things (people, actions) that are bad for them? These seem to be the questions at the center of “Stranger by the Lake,” a quiet film that casts an unsettling spell.

Franck is a young gay man who makes daily visits to an idyllic lakefront beach that serves as a popular gay cruising spot. Men scope each other out and then with a nod of the head or wink of the eye agree to wander off into the bushes to engage in all sorts of sexual activities, safe or otherwise. Franck crushes on Michel, a studly guy who proudly struts around naked, and finally succeeds in securing a tryst with him. But then one night he witnesses Michel casually drown another man. In one of the film’s most effective twists, the knowledge of Michel’s murderous tendencies draws Franck closer to him, and we watch him fall more and more for this guy who we know he should be turning in.

The film is one sustained note of creeping dread. From the start we just feel like things are headed to a bad place, and we stare with morbid fascination to see just what that bad place will be. All sorts of unpleasant spectres flirt at the margins of these men’s lives. There’s something predatory about the act of cruising in the first place, and the loneliness of Franck’s life — never explicitly shown but always implied — makes him that much easier a victim. And then there are the unspoken phantoms of disease and addiction that color the men’s behavior. For Franck, sexually transmitted diseases are a risk worth taking for the thrill of the hookup, just as an addict sets the consideration of consequences aside until after the high has worn off. Franck is compulsively drawn to the lake again and again long past the point where better sense, not to mention an instinct for self preservation, should prevail, and he willingly puts himself in greater danger as the film progresses. It’s tempting to read the Michel character as a sort of personification of the allure of self abuse — the excitement of self-imposed danger turned into an enticing and literal bogeyman.

The ending to the film is ambiguous and supremely creepy. It’s a movie that’s hard to get out of your head after you’ve seen it. 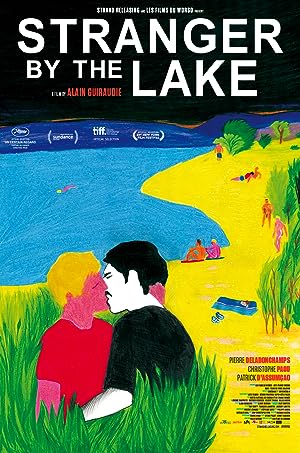