This is certainly one of the most provocative films ever included on any of the Boys On Film releases, although I’m still in two minds about whether it’s a good one or not – but that may be the point. It’s about the young (and pretty gorgeous) Jean-Christophe, who wants to be a model, but as his day goes on he becomes involved in a series of ever more degrading situations, from the incestuous advances of his prostitute mother to guys who want to piss on him. His story is intercut with shots of gay S&M and a dancer whose journey echoes that of the main character.

It’s an odd film, where it’s never quite clear how much Jean-Christophe desires these degrading experiences (and if he does, why), or if he’s simply being subjected to many of them – it’s all a little odd and sometimes rather implausible in that he often seems to stumble into situations that are humiliating but can only be that way if he agrees to it, even tacitly. That said, there’s also the chance some of these things are only going on in his head. Maybe it’s just that humiliation isn’t something I really ‘get’, sexually. Likewise, the film sits of the edge between slightly uncomfortable voyeurism and true art – although it’s not always clear what the artistic statement is. It is undoubtedly an interesting short that’s sexy and yet uncomfortable – but I can’t help wonder if its lack of clarity is more problematic than it thinks it is. But maybe if you’re the kind of person who enjoys degradation to the point you’re in tears, you’ll understand it better than I do.

There is actually a feature version of this, simply called Little Gay Boy, which may explain things a little further, so perhaps I’ll have to check that out sometime. 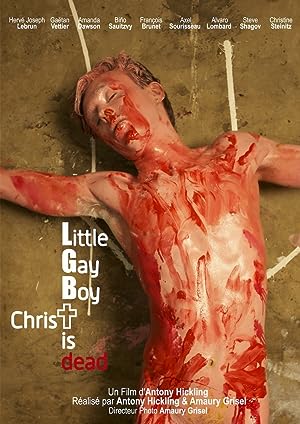 Be the first to review “Little Gay Boy, chrisT is Dead 2012” Cancel reply