A group of young boys are stranded alone on an island. Left to fend for themselves, they must take on the responsibilities of adults, even if they are not ready to do so. Inevitably, two factions form: one group (lead by Ralph) want to build shelters and collect food, whereas Jack’s group would rather have fun and HUNT; illustrating the difference between civilization and savagery.

After reading Golding’s classic novel, my class watched this adaption of “Lord Of The Flies” in our literature class. I found it to be quite good, and a hell of a lot better than the 1990 version, which alters all too many important moments and characteristics of the book. Reading over these comments, I was very confused. 1. The story and moral of “Lord Of The Flies” is so haunting and powerful that it does not need an overly dramatic score. The tune that Jack and his choir sing around the island is just the right touch. 2. Of course the acting wasn’t as amazing as it could have been! Everyone seems to be forgetting just how young and inexperienced these boys were. Besides, the character’s in Golding’s story are just as young, and act their age (however violent and disturbing it may be). I found the camera work to be quite lovely. The film uses beautiful shots, which only enhance it even more. The final scene is one of my favorites. My only bone to pick is how quickly the film goes through the events in the book. I really do wish it would have slowed down a bit, and concentrated more on such characters as Simon, as well as the boys transformation into savages. Overall I found this adaption of “Lord Of The Flies” to be fantastic. My advice to future viewers of this film is to read the book first, definitely watch this 1963 version afterwards,and completely avoid the 1990 version all together. 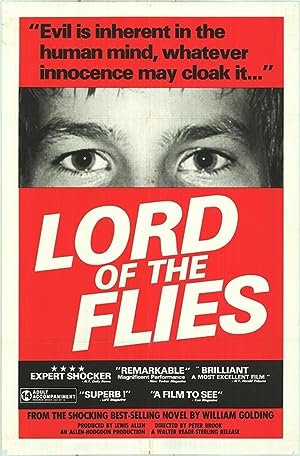