Lost in Paradise 2011 with English Subtitles

Khoi, a naive twenty-year-old, travels to Ho Chi Minh City from the countryside to begin a new life. It’s his first time in the big city and he’s looking for a place to live. He befriends Dong, a handsome extrovert who offers to share his apartment. When Khoi goes to check the place out, he meets Lam, who also appears to be living there. Khoi decides to stay, but while he showers, Dong and Lam – who turn out to be boyfriends – run off with all his cash and belongings. It’s not long before Lam is himself abandoned by Dong, and winds up back on the street as a prostitute. Meanwhile the penniless and disillusioned Khoi takes on menial jobs to survive. Lam and Khoi are eventually reunited, and despite Lam’s past actions, the two become closer and closer – even though Khoi becomes more and more troubled by Lam’s dangerous source of income. At the same time, Cuoi, a mentally handicapped man abandoned by his family, attempts to befriend a female prostitute. Her pimps do not take kindly to his hanging around and scaring away customers, but she takes pity on him and ultimately becomes his protector.

Sorry but I have to say the correct name of this movie is Lost in Paradise, not Lost Paradise. I watched it a few days ago, and I was moved to tears. It is a great movie. I love everything about it especially the music. In fact, it is the best Vietnamese movie I’ve ever seen. The story is simple, but it attracts viewers because it’s REAL. I was most impressed with the prostitute. Just looking at her sad eyes made me have many mixed emotions. The story of the prostitute and the Smile man may not relate well with the love story of the two main characters. However, their acting is impressive. The ending is sad. I had expected this movie would not have a happy ending before watching it. However, when I saw the ending, I couldn’t stop my tears ( sorry for being too sentimental). Highly recommend. 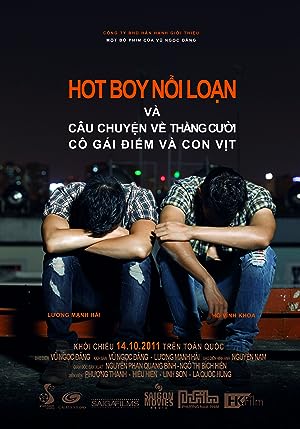