Olle, an introverted, well-mannered boy with an air of innocence and sincerity about him has been camping with his father at the same camping ground with several other people for years now. A sort of tradition that ends in a karaoke party. Then one summer, a family friend brings her reticent ‘city boy’ nephew, Kevin, and his pet budgerigar. Olle accidentally releases the bird and what follows is a discovery of friendship and love between the guy who has grown up in a loving environment and simply accepts love for what it is and the guy who’s apparently been burned too many times in his own circle to feel comfortable with it.

Excellent film that I enjoy watch it many time from time to time, observing in their details. The performance of the cast is excellent much better than famous actors, especially Olle (Tobias Bengtsson) who knows to show perfectly the innocence, brave and love. His sweet and fresh smile fits very well in the film. Credit for the director and the scriptwriter too. it will be one of my film that I keep it close to me, because when after seeing the short film, I can feel the love on the air with a happy ending, that make me feel cheerful. It is a good example of good short film with low budget and only four actors. Thanks for festival I could to know about this films and others,that inspire me to write some short novels and scripts. 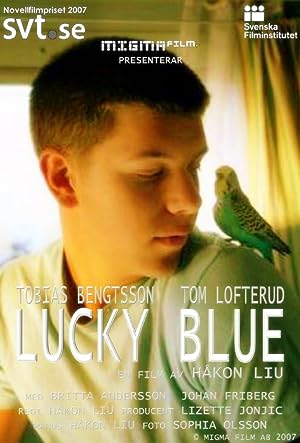 Lucky Blue (2007)
28 min|Short, Romance|30 Jan 2007
6.7Rating: 6.7 / 10 from 1,147 users
Olle, an introverted, well-mannered boy with an air of innocence and sincerity about him has been camping with his father at the same camping ground with several other people for years now….
Director: Håkon Liu
Creator: Håkon Liu
Actors: Tobias Bengtsson, Tom Lofterud, Britta Andersson, Johan Friberg

Be the first to review “Lucky Blue 2007” Cancel reply