Abandoned by his American lover, a handsome teenager from the mountains journeys to Manila in an effort to support his family. With a popular call boy as his mentor, Paul enters the glittering world of male strippers, prostitution, drugs, sexual slavery, police corruption and murder. Teeming with sex and Asian beefcake, Macho Dancer is a searing indictment of the hypocrisy and police corruption rampant under both the Marcos and Aquino regimes.

First of all, I was amazed that such a bold film could come out of the Philipines, which I’d always imagined to be a pretty conservative state which would repress a film with so much Young nudity. India has never made such a film, though I have no doubt the story could be Indian too (the difference being that i know of no clubs in Bombay or Delhi or Calcutta which has naked boys dancing on stage – could that really be so common in Manila?). The boys here are of ambiguous sexuality. Are they gay? Or just horny? They seem to do it only with customers and not with each other. And they hang around with girl prostitutes who treat them as “one of us.” The main protagonist is actually straight, it turns out, falling in love as he does with a female prostitute. But at the same time, he’s perfectly comfortable being a gay rent boy – there’s absolutely no angst associated with that and instead there’s much bonhomie and fun in the changing room as he teenager prepare to go on stage for their “macho dancing.” ! That, I think, was one of the most appealing aspects of this movie. 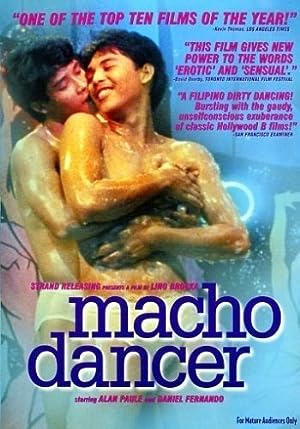