Santiago, capital of Chile during the Marxist government of elected, highly controversial president Salvador Allende. Father McEnroe supports his leftist views by introducing a program at the prestigious “collegio” (Catholic prep school) St. Patrick to allow free admission of some proletarian kids. One of them is Pedro Machuca, slum-raised son of the cleaning lady in Gonzalo Infante’s liberal-bourgeois home. Yet the new classmates become buddies, paradoxically protesting together as Gonzalo gets adopted by Pedro’s slum family and gang. But the adults spoil that too, not in the least when general Pinochet’s coup ousts Allende, and supporters such as McEnroe.

In 1973, in Santiago of Chile of the first socialist president democratically elected in a Latin-American country, President Salvador Allende, the principal of the Saint Patrick School, Father McEnroe (Ernesto Malbran) makes a trial of integration between students of the upper and lower classes. The bourgeois boy Gonzalo Infante (Matías Quer) and the boy from the slum Pedro Machuca (Ariel Mateluna) become great friends, while the conflicts on the streets leads Chile to the bloody and repressive military coup of General Augusto Pinochet on 11 September 1973, changing definitely their lives, their relationship and their country.

“Machuca” is a touching and realistic tale of friendship and coming to age in times of military coup in Chile. The Chilean director Andrés Wood made this fantastic movie following the political genre of Costa Gravas, but with a subtle drama with two children getting conscience of the fight of classes and the changes in their country by force and violence. The story in some moments seems to be a documentary so perfect the direction and acting are. The debut of the two lead actors, Matías Quer and Ariel Mateluna, is awesome: the eyes of the silent Matías Quer disclosing reality and the facial expression of Ariel Mateluna are amazing. “Machuca” is a highly recommended movie, and for the younger generations slightly see what happened in the 70’s in South America and particularly in Chile. A few figures about Pinochet’s dictatorship: 30,000 Chileans were killed; 100,000 Chileans were arrested without a trial; 22,000 students were expelled from the universities; 150,000 Chileans were exiled. My vote is ten. 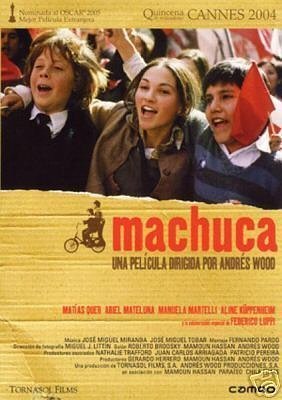 3 reviews for Machuca 2004 with English Subtitles