Marek is a 16-year-old from a provicial village who runs away to Prague when he begins to fail at school. He mugged shortly after arriving in the city and is rescued by Honza with the promise of work. Marek is taken to an apartment, drugged, and becomes a male prostitute. He is a bit smarter that his collegues and teams up with a friend, David, in order to go after bigger scores–to cash in and get out. They manage to stash away a bit of money, but when it comes time to return home, Marek loses his nerve and is soon back in the city.

A worthwhile film that is very graphic if a bit rough around the edges. My DVD copy had some thumping noises and the flashback thing didn’t work too well in my opinion. The lead character of Marek brings his problems on himself but he is not helped by a father that seems to think yelling and hitting his son will solve the problem. But then he is only 15 though the actor that portrayed him seemed older but that would not be surprising given what he had to do in the film. I found it surprising that Marek’s friend David and he were not lovers or even seemed homosexual although the porno film maker referred to them as such. But then I know nothing at all of this scene. David had been recruited to the life at an early age and his sexuality was ambiguous as well. Both boys were amoral for sure. Not for the squeamish. 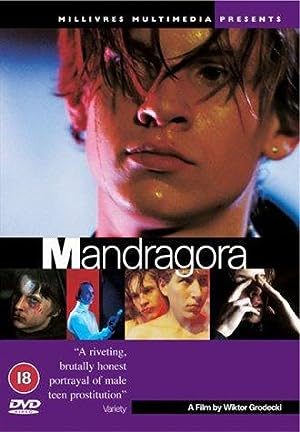 3 reviews for Mandragora 1997 with English Subtitles