Manny coaches soccer for the fashionable Creighton Hall school, but is relieved of duty because he is ‘not a good match’ for the school. He finds a job at a Catholic home for orphans, where he forms a new soccer team, with the help of one very good player Pepe who turns out to be a girl. ‘Pepe’ is the sister of one of the orphans, who comes to the all-boy orphanage posing as a boy, because her former foster home was an abusive environment. Along the way, Manny has incurred a gambling debt, his creditors begin to lean on him, and the boys find out. They set up a soccer game and stake the outcome against Manny’s debt. If they win, the debt will be forgiven.

I have just found out that this film is called Manny’s Orphans. I have only known it as Kick! which is impossible to find. I will have to wait for a re-run to watch this as an adult, but I was 9 when I watched it and it has stuck with me for over 20 years so far. I guess that other reviewers were watching with jaded adult eyes. All I can remember is that Pepe/Rosa was my hero/heroine! A girl dressing as a boy to play soccer! Wow! This was such a wonderful exciting thing for a girl to do. (I was born and raised in Southern Africa where girls were girls and heaven help you if you were interested in soccer or boys games!) When she was exposed as being a girl, she still went on to play and won! I know that this story has been done to death, but as this was my first sports film where the underdogs triumph, it stuck with me. 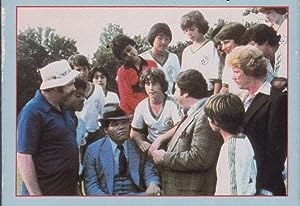 Manny's Orphans (1978)
92 min|Comedy, Family|N/A
6.3Rating: 6.3 / 10 from 51 users
Manny coaches soccer for the fashionable Creighton Hall school, but is relieved of duty because he is 'not a good match' for the school. He finds a job at a Catholic home for orphans, where…
Director: Sean S. Cunningham
Creator: Victor Miller, Steve Miner (story)
Actors: Malachy McCourt, Chet Doherty, Sel Skolnick, Xavier Rodrigo