The story about a group of youths who can’t face the thought of growing up because anyone who does becomes a rampaging zombie.

Motion Picture Rating (MPAA)
Rated R for disturbing violence, language throughout including some sexual references, and teen drug and alcohol use

I recently watched this film and while it’s certainly no blockbuster, I was surprised that I didn’t find myself bored or wishing I had something better to watch. This film was far more dramatic than I expected, especially considering that nearly the entire cast were adolescent kids. As mentioned in some other reviews, the poor decisions made by characters is actually somewhat believable considering their young age.

That said, this film deserves far more than anything below a 5 out of 10. I scored it a 6, simply because it surprised me with decent, yet brief SFX and reasonably high production values. The acting also exceeded expectations. I anticipated some teen angst, but it wasn’t over done or gratuitous. The film worked fine for a budget indie flick about some teen’s perspective of the apocalypse. 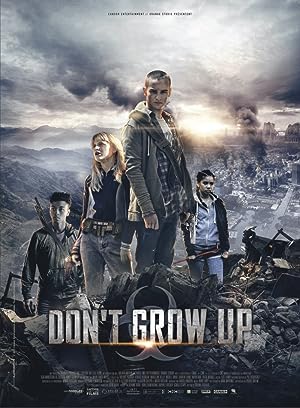 Don't Grow Up (2015)
81 min|Drama, Horror, Sci-Fi|16 Dec 2015
4.6Rating: 4.6 / 10 from 893 users
The story about a group of youths who can't face the thought of growing up because anyone who does becomes a rampaging zombie.
Director: Thierry Poiraud
Creator: Marie Garel-Weiss (screenplay by)
Actors: Fergus Riordan, Madeleine Kelly, McKell David, Darren Evans