Kim (Karl Wagner) is an attractive and well-liked 15-year-old Danish boy with a rather ordinary life. He likes to drink beer and party with his friends. School is a bore. His parents are divorced and his mother doesn’t make much money. She nags at him, frustrated that he wants to go out all the time, and that he doesn’t apply himself or take responsibility. Suddenly Kim finds himself taken hostage by bank robbers, along with Marianne (Marianne Berg), who’s also 15. They find themselves out in the country, hiding from the police, making love and meeting unusual people with unconventional points of view. What will happen to the young lovers’ new romance when the adventure is over and they have to return to their real lives?

The manus was written by Lasse Nielsen and his twin brother Carsten Nielsen. The manus was rewritten during the production and the direction was more a team effort than done by Morten Arnfred alone. Lasse Nielsen was the director on this production. Morten Arnfred was assigned to work behind the camera – he shut the film. Just to clear up a few misunderstandings. Music by Sebastian. The work title of the film was: I Morgen Kommer Aldrig, like one of the songs in the film. In mid production the producer Steen Herdel decided to change the title to: Måske Ku’ Vi, and Sebastian had to write a new title song: Måske Ku’ Vi, that became a big hit. 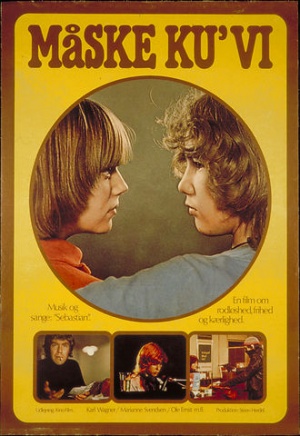