Max and Moritz are two young brothers living an adventurous life of petty crime in Hamburg, Germany. After the two boys steal a car and get into an accident, with the adolescent daughter of a Hamburg Senator sitting in the passenger seat, the two scoundrels are packed up and sent to a boot camp. This military-style camp is run by Axel and Henry, two former East German soldiers who still strongly believe in Communism but are secretly gay lovers. Max and Moritz steal another car…a red Ferrari owned by small-town pimp Murder-Hanne. The nationalistic sadist teaches the boys a painful lesson, but Max and Moritz wouldn’t be Max and Moritz if they let this weekend-fascist get them down… and when they acquire the key to their military school’s ordinance depot, things start to change.

Max und Moritz reloaded is an old story by Wilhelm Busch about two really mean brats that torture their environment and are force the tortured ones to respond. The reloaded film reinterprets the age old story in a present days German setting.

In Germany, when this film was released, the critics were not at all euphoric about it, and as far as I can tell, they were successful in keeping the crowd out of the theatres. Shame on them! This film is a hilarious farce, telling the story of two Hamburg brats, their alcoholic mother, a devoted social worker Paula (also the wet dream of the two boys) who are sent to an Eastern German boot camp. This boot camp is managed by two gay former army guys, and in a way they get to get along with each other. Of course, this takes some time, and lots of adventures are there to entertain you. But there is also the bordello master Hanne, and he gives the two boys a really hard time. Be excited to see the end of the film and what happens to Hanne and Max und Moritz! Max und Moritz reloaded is wonderfully not pc, sparkling with fine ideas, clear cut characters and a stunning rhythm. Action is followed by mind bending landscape shots, and then it goes boom again. Interspersed is the film with occasional cartoon sequences (perfect: the hilarious Paula on ice piece), and there are lots of songs integrated, also in a very nice manner. If you are a fan of justifying delight in entertainment you might even say there are some social dimensions of German life today to be found. But this does not do the film justice. It is an entertainment piece, and I think it does one thing: entertain you at its best (if you like trashy stuff).

The cast is generally good or excellent, you can see that everyone must have liked what they were doing. The most disturbing and mind-shaking appearances are by Ben Becker, who does an unbelievable job at acting as a sugar daddy. This must become a classic.

I can only hope that the DVD is as successful as this film deserves. Unfortunately, the market for trashy comedies in Germany might not be ready for this film yet (still). Everyone who thought that Goddbye Lenin was a little too slow and boring should like this film. Or maybe it simply is the film that Schlingensief simply does not know how to do? Try for yourself, sit back, relax, and be entertained! For friends of directors like Wenzel Storch and Christoph Schlingensief. For friends of films like “Frau Rettich, die Czerny und ich”, “Komm süßer Tod”, “Muttertag” by Roland Düringer. 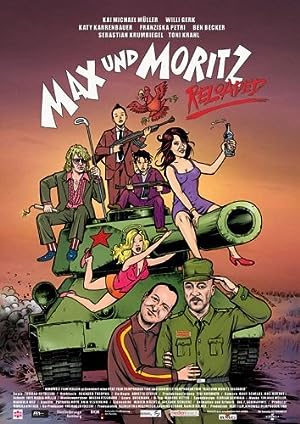