‘Me and You and Everyone We Know’ is a poetic and penetrating observation of how people struggle to connect with one another in an isolating and contemporary world. Christine Jesperson is a lonely artist and “Eldercab” driver who uses her fantastical artistic visions to draw her aspirations and objects of desire closer to her. Richard Swersey, a newly single shoe salesman and father of two boys, is prepared for amazing things to happen. But when he meets the captivating Christine, he panics. Life is not so oblique for Richard’s six-year-old Robby, who is having a risqué Internet romance with a stranger, and his fourteen-year-old brother Peter who becomes the guinea pig for neighborhood girls — practicing for their future of romance and marriage.

Miranda July’s “Me and You and Everyone We Know” might be the most miraculous first fiction feature by an American in 3 or 4 years; it’s rivaled only by Andrew Bujalski’s “Funny Ha Ha.” Christine (July) stalks the recently separated Richard (John Hawkes), who would try anything to impress his kids, and gets third degree burns for his trouble. His elder son, Peter (Miles Thompson) longs for connections that go beyond instant gratification, while the younger Robby (Brandon Ratcliff) gets all the funniest lines, mostly copied and pasted from cybersex chats.

“Me and You” is about the act of pretending and about performance as life, but first of all it’s about extremely likable characters played by likable actors, foremost among them July herself, whose Carole Lombard-meets-Laurie Anderson deep ditz may be a complex stack of masks upon masks, but is more likely just the way she is.

The movie is notable for what isn’t in it – both malice and pain are almost absent. Removing malice – July’s world is one in which a kid can safely walk alone through some seedy parts of Los Angeles – is unfashionable, brave and, given the gentle tone of the piece, necessary. But the absence of pain isn’t intentional: July would like us to feel the loneliness of the characters. But their isolation is more a trait of their personalities than a source of suffering. In this respect, the movie is perhaps too glossy for its own good. There’s one excellent exception, revolving around a granddaughter’s photo by an elderly woman’s bedside, which becomes a substitute for a shared life that dissolved too soon.

The scene that everyone picks out is the walk to Tyrone Street. Richard and Christine decide the walk to the intersection will stand in for the relationship they’re not having: first the unrelieved joy of being together, then the getting bored with each other, then the fighting and the split. Only they keep chatting flirtily, about whether the walk represents a year and a half or twenty, until they get to the corner, and then we wonder how they can possibly go their separate ways. Although this is as great as anything in the first 75 minutes of “Before Sunset,” its emphasis is much more on romantic comedy than the rest of the movie. There are more typical scenes that approach this quality. A goldfish on the roof of a car. A child running his fingers through a woman’s hair. A picture of a bird in a tree, in a tree. And the ending, where it seems human actions are motivating the sunrise.

The scene I consider the finest is a quiet one: Sylvie (Carlie Westerman), a tween spending her childhood preparing for life as a homemaker, gets a gift from Peter: a plush bird. (“It’s for your daughter.”) It would be unusual merely for depicting a platonic friendship between kids of different genders and different ages. But it’s remarkable for crystallizing what it seems every filmmaker is trying to say these days: that there’s something to be gained from thinking like a child. Through July’s lens, it doesn’t seem like a regression: no redundant literalization of fantasy is necessary. The achievement of “Me and You and Everyone We Know” is to show how the mundane moments of our lives can be mundanely transformed by imagination. 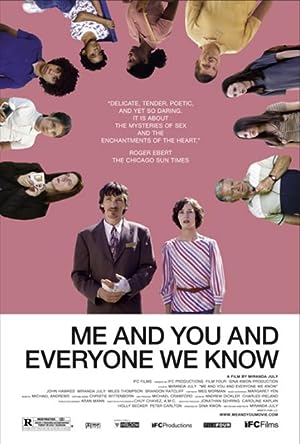