In a remote barbarian land, where the natives and Medea, a high priestess and powerful sorceress, worship the Golden Fleece to protect the crops, Jason and the Argonauts arrive with the intention of retrieving it. Captivated by the hero’s charm, Medea betrays her people and her beliefs to follow Jason back to Greece, however, when he deserts her and the their two children and the King banishes her, Medea will plot her furious revenge. Can they escape her wrath?

Medea is an extraordinary film which some will find difficult. Telling the story of Jason and his quest for the Golden Fleece, this is not the stuff of Ray Harryhausen. Meeting the priestess of the Fleece, Medea, he falls in love with her and takes her home. Years later, after bearing him sons, she exacts a terrible revenge after he spurns her for a new love. Medea is also extraordinary in exhibiting Pasolini’s demonstration of contrasts in plot development and framing. In the sequence in which we are introduced to Medea, we witness the mesmeric nature of a human sacrifice, which changes from the ecstatic to the horrific within the same sequence. This motif recurs throughout the film, and has prompted admiration from French philosopher Gilles Deleuze, who mentions Pasolini in his treatise on the movement-image. Filmed with a mixture of professional and non-professional actors, Medea is a challenging and refreshing change from the usual, as it builds up to a frightening climax in an unconventional way. Often shown in ‘World Cinema’ slots late at night, it’s a film worth staying up for, or recording, for those seeking an alternative to Hollywood pap. 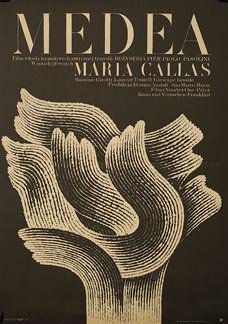 Medea (1969)
110 min|Drama, Fantasy|28 Jan 1970
7.1Rating: 7.1 / 10 from 3,728 users
After his quest to retrieve the fabled Golden Fleece, Jason returns to Greece with the powerful sorceress, Medea. However, when the king banishes her, it's only human that Medea plots her furious revenge. Can they escape her wrath?
Director: Pier Paolo Pasolini
Creator: Pier Paolo Pasolini
Actors: Maria Callas, Massimo Girotti, Laurent Terzieff, Giuseppe Gentile

2 reviews for Medea 1969 with English Subtitles