My Sweet Orange Tree begins with José Mauro de Vasconcelos (Caco Ciocler) receiving an edition of his finished novel. Then, the film starts to tell the story from the writer’s memories, through flashbacks. Zezé (João Guilherme Avila), a boy of eight years who lives in Minas Gerais in a very humble house with his family, consisting of his father (Eduardo Dascar), an unemployed and alcoholic, and his mother (Fernanda Vianna), which works to support the home and his brother and sisters. Despite the lack of understanding, affection and the aggression suffered by from his father and school colleagues, the boy has a great skill for storytelling using his imagination. With financial difficulties, the family has to move. At the new home, Zezé finds an orange tree, which he talks everyday. However, for being extremely extrovert he got involved in several confusions. One of them, he tries to ride on the bumper of Manoel Valadares, the “Portuga” (José de Abreu), but is caught and spanked. The boy feels humiliated and wants revenge, however Valadares ends up understanding Zezé, which turns to share his world of fantasies, and a new friendship arises.

In my opinion, the best debut so far: A must-see, exciting movie, accurate interpretations, flawless script (suggests more than shows), beautiful music and cinematograph, which transports the viewer to another time (there are some abrupts cameras movement). A dramatic film could slip easily into the fussiness. Marcos Bernstein dose emotions gingerly, without weighing the hand. He could have made a movie with a script more classic like Chico Xaveir or Two Sons of Francisco, but choose another path. People of any age will understand the choices of the director and enjoy the movie. The acting of John Avila and José Guilherme de Abreu are worthy of Oscar. By the way, if you choose Meu Pé de Laranja Lima for Brazil’s representative on the prize of the academy, has a chance to be one of the nominees. Many tears (I left dehydrated, needed to take 1 liter of water after the session) 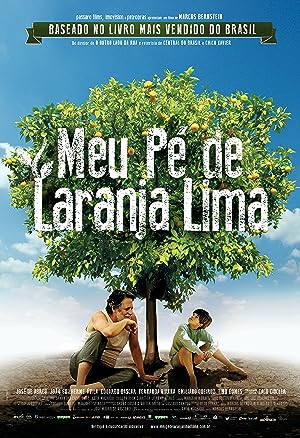