An 18 year old man living in a Dublin housing estate with his grandfather, is caught holding drugs for his friend’s older brother and is sentenced to 3 months in prison.

Michael Inside has been described as a prison film, a category with a welter of genre expectations in which director Frank Berry hasn’t the slightest interest. His purpose rather is to expose audiences to the consequences of unexamined notions about crime and punishment. The film makes it obvious that cinematic depictions of crime rarely rise above titillation. Even great Gangster films – from Godfather to Casino – find a Wagnerian grandeur in their doomed heroes. There’s no grandeur in Michael’s story. Before he’s locked up, he’s imprisoned by family history, class and community. It’s a polemic of the best kind, one that makes its case by plunging us into its protagonist’s claustrophobic experience so completely that any didactic editorializing becomes redundant. The nearest comparison is the Italian film Gomorrah, another modern Neorealist drama with an objective camera, impressionistic editing, minimalist score, and laconic script. The British criminologist Tom Gash recently questioned the logic of locking up young men at precisely the age when they’re most likely to stop engaging in criminality. It’s a compelling argument but it’s not enough to make it with statistics and reason. It will take angry films like Michael Inside to make people demand reform. These days the most trivial films are routinely described as important. This one is. 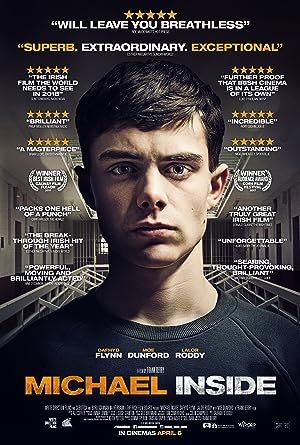 Be the first to review “Michael Inside 2017” Cancel reply