Lorenzo works as diver on an oil rig in the middle of the Mediterranean Sea. In his profession is the best. He loves his freedom. When he gets bored, he takes a dinghy to go ashore and look for entertainment and adventures. Until he meets a girl who is different from the others, she is Claudia, he really likes her. The passion soon breaks out.

A few months ago came out in our rooms a beautiful Japanese film “Father and son”, Aihm, unloved by the public which asked, if it was more important for a parent to love their child, and brought him growing every day or counted however, most of the blood relationship.
The concept of family has changed over the years. Father, mother and son are now one of the possible types of families: enlarged, homosexual, heterosexual.
Difficult to determine which is the right formula for a minor, the law always tries to protect him, but not always the rights are in line with the feelings.
“My Dad”, which had already met with great acclaim last Rome Film Festival, is the simple and touching story of Lorenzo (Pasotti) young and single diver of San Benedetto del Tronto that after being dumped by his girlfriend, why not eager to become father, spends his nights with different women having fun in the company of his friend and business partner Roberto (Troiano).
One evening, as many in a local Lorenzo knows Claudia (Finocchiaro) which has a night of passion. But the night become more nights and would soon turns into a three-way relationship because Claudia is the mother of the child Matthew (Calvagna).
The relationship between Lorenzo and Matteo does not start well, both unwilling and impatient to know each other.
The barrier that divides them but slowly crumbles to the love that both have for Claudia, and when the latter for work is forced on a journey to Germany, the two are forced to cohabitation and especially to open up, learning to want well.
Lorenzo finds himself without realizing,. overwhelmed by love for Matthew and becoming for the child in fact the true father figure that both missing. A relationship between the two protagonists based on the little things, the male complicity, but also as a teacher of life and education that will bring the child to see Lorenzo as the ideal companion for the mother thus forming a real family.
A screenplay simple, clear, smooth, but at the same time rich in content and full of emotions that leaves the viewer indifferent. A love story that breaks down the mere blood ties, inviting to know and above all to reflect what the real gestures and words that make a man a father to a child, and what it means to truly be a family. The narrative is poignant pathos, but at the same time realistic and current.
Directed by Base is of value, clean, delicate, able to collect the various nuances of the story, managing to highlight the changes of feelings of the characters without them ever becoming rhetorical and melodrama
Beautiful and touching is the soundtrack and worthy of mention is the photography.
I confess to not being an avid fan of Giorgio Pasotti, but in this film is astonishing for its intense and moving interpretation. It ‘really worthy of mention the capacity in which manages to step into the shoes of Lorenzo, perhaps inspired by his own personal experience, being able to give it body and soul in an effective and convincing.
Niccolò Cavagna moves on the scene like a veteran. His eyes and his expressions before the words tell the mood of his character. They form a perfect match with Pasotti, thus creating a symbiotic empathy that project entirely to the audience.
Donatella Finocchiaro with intensity and talent shows us the different faces of a woman, mother, lover, worker, giving each of their thickness and strength and forming a trio with Calvagna and Pasotti really about.

The final, although dramatic, is well built and is exciting and leaves the viewer the beautiful belief that count as blood ties and the law to protect them, nothing and no one can decide who to love like I was a real father. 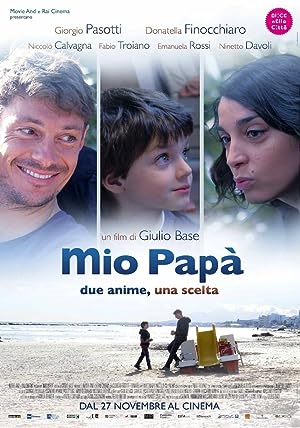