Ttwelve-year-old boy Dennis P lives in Copenhagen with his mother. Since the death of his father, his mother has been both depressed and overprotective. At school he struggles to cope with a mean and obsessive teacher, and the girl he likes seems to be more interested in his best friend than him. One day he walks into a church and, expecting little effect, exclaims his wishes of better luck at home and at school. Miraculously, an angel who looks a lot like Dennis’ father appears and presents him the gift of a pair of angel wings. From then on, Dennis can literally get anything he points at, changing the behaviour of other people as he sees fit. It’s the experience of a lifetime, but can it last?

Dennis P., a twelve years old Danish boy in a modern one-mom-one-kid family has problems. Big problems for a twelve year old boy. His mom’s a nagging mess, his teacher is targeting him, his best friend is in love with the same girl as he is, and he’s still hairless, as one of the last boys in his class. As I said, big problems.

If I had to describe this film in one word it would have to be “cute”. But still in such a way that boys would want to see it, too. I think many boys around 10-14 will recognize themselves in these characters. Although there is a naïve, Christian theme it doesn’t ruin the film or make it “religious”.

Well worth to rent and watch with your late pre-teen/early teen nephews or nieces while babysitting. Expect some giggles. 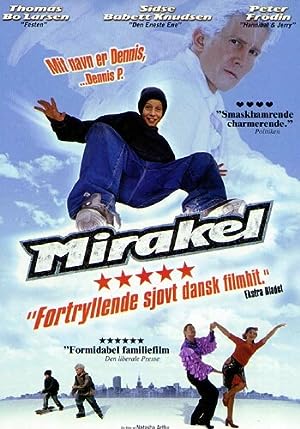 1 review for Mirakel 2000 with English Subtitles