Alex decides to end his kid brother’s nightmares by forming a task force to take care of imaginary monsters. When their business becomes a hit, nothing can go wrong…until one of the monsters turns out to be real, and really big.

Alex (Matthew Kosto) is a high school student just trying to navigate everyday life – crushes, schoolwork, teachers, bullies, and looking out for his little brother Gavin. After Alex’s best friend Dylan (Auggie Pulliam) tells Gavin a scary story, the boy begins having nightmares and visions of a frightening monster. Gavin’s nightmares are affecting Alex’s sleep, which in turn lands him in hot water with his science teacher Mr. Phillips (Stephen Tobolowsky). Fed up, Alex turns to Dylan and an unlikely new friend, loner Phoenix (Alicia Del Aguila) to defeat the “monster” and put Gavin’s fears to rest. After successfully helping Gavin, the crew becomes known as “Monster Busters,” now famous for their ability to extinguish imaginary monsters. However, the Monster Busters are not prepared for the appearance of a very real monster, which causes trouble for everyone and tests their friendships.

Monsters at Large is a super cute, thoroughly entertaining film for the whole family. Other than a couple of crude remarks, the film’s content is clean as a whistle and manages to scare, delight and tickle without useless filler. The story itself is clever; it’s told well and explores a barely visited genre: mildly funny, barely scary, kid-centered and in the style of Goosebumps (2015) or the Disney classic Under Wraps (1997). I like that the kids in the movie are witty, smart and resourceful; however, there never seems to be any real consequences for their shenanigans, which is usually the case with most children’s movies. In addition to good, clean fun, Monsters at Large has a great moral lesson, too. The value of sticking together and the added realization that you can’t judge a book by its cover are subtle points in the movie. 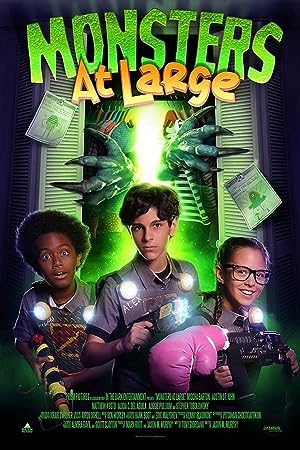 Monsters at Large (2018)
91 min|Family|13 Mar 2018
5.9Rating: 5.9 / 10 from 190 users
Alex decides to end his kid brother's nightmares by forming a task force to take care of imaginary monsters. When their business becomes a hit, nothing can go wrong…until one of the monsters turns out to be real, and really big.
Director: Jason Murphy
Creator: Anthony Steven Giordano
Actors: Mischa Barton, Stephen Tobolowsky, Austin St. John, Matthew Kosto

Be the first to review “Monsters at Large 2018” Cancel reply