In 2038, Earth’s mineral resources are drained, there are space fights for the last deposits on other planets and satellites. This is the situation when one of the bigger mining corporations has lost many mineral moons except one and many of their fully automatic mining robots are disappearing on their flight home. Since nobody else wants the job, they send prisoners as a last resort to defend the mining station. Among them, internal affairs agent Felix Stone, assigned to clear the whereabouts of the expensive robots. In an atmosphere of corruption, fear and hatred, Stone gets between the fronts of rivaling groups and locates the person committing sabotage.

During the eighties I used to purchase those fantastic Variety and Hollywood Reporter film market editions that were stuffed with movie poster ads advertising the latest film projects in various stages of development from dozens of companies. Unfortunately they stopped producing those great issues by the mid nineties. Anyway, I saw the poster ad for “Moon 44” and the imagery evoked Robert Heinlein. I couldn’t wait for this film to come out and it never did. Or the film was in limited release. So finally, I secured a copy of this film on VHS cassette and checked it out. Here is my review.

“Moon 44” is actually a good sci-fi flick. I won’t go into the story because you can get that elsewhere on this site. The movie struck me as a cross between “Outland” and “Brubaker”. I think what also struck me is how impressive the production design was. I really felt I was watching a mining station on some far off celestial body. The acting was good and especially from Michael Pare and Brian Thompson. It’s a good sci-fi film that is definitely worth a look! 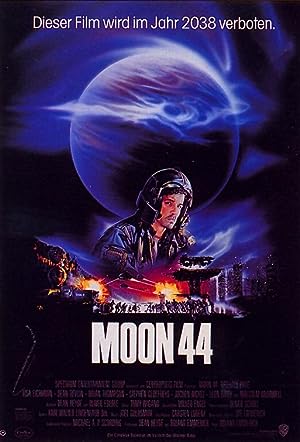