Having always felt he was born in the wrong body, 10-year-old Tom chooses the name Mrs McCutcheon rather than the name he was given at birth; he also prefers the flow of a dress rather than the cut of a pant. Now at his third school Tom is having trouble settling in and finding acceptance from his newfound peers – except for Trevor, a tough little charmer who also suffers prejudice due to his Aboriginal heritage. With the school dance only days away Tom is thrust on a journey of self-discovery and sacrifices to find his place in the world. Be prepared for a courageous ending that might just revolutionize the school dances forever.

Warning: Spoilers
Whether intentionally or not, the ending scene of this short shows up the one little “gay moment” at the end of the live-action Beauty and the Beast in so many ways. It is true that an independent short does not have the same kind of audience expectations as a classic Disney movie, but the short does have mostly nine-year-old characters which counts for something. I’ve never seen or heard of anyone wanting to cross-dress at such a young age, but I expect I will start to more often in coming years. The school bullying was pretty standard and unrealistic, but at least they cast a short kid as the head bully instead of resorting to the fat bully cliche. I, and most of the audience I saw it with, liked Mrs. McCutchen’s friend Trevor, and I liked that he was a sporty kid who got into trouble instead of an obviously gay kid. The ending dance was a little overly cute, but it was nonetheless fitting in showing the sort of acceptance and tolerance that the short is hoping to bring about. 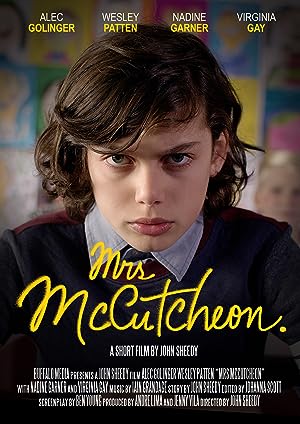 Mrs McCutcheon (2017)
17 min|Short, Comedy, Drama, Family|10 Jun 2018
6.1Rating: 6.1 / 10 from 115 users
Having always felt he was born in the wrong body, 10-year-old Tom chooses the name Mrs McCutcheon rather than the name he was given at birth; he also prefers the flow of a dress rather than…
Director: John Sheedy
Creator: John Sheedy (story), Ben Young
Actors: Koko Crozier, Ava Allen, Mikayla Borchard, Jackson Bremner-Giles

Be the first to review “Mrs McCutcheon 2017” Cancel reply