My life as a dog 1985 with English Subtitles

Ingemar lives with his brother and his terminally ill mother. He may have a rough time, but not as bad as Laika – the russian dog sent into space… He gets sent away to stay with relations for the summer. While there, he meets various strange characters, giving him experiences that will affect him for the rest of his life.

This odd little film relates the story of Ingemar, a boy who learns about life, death, loss, and practically everything else. The boy is a charming little fellow, and all the odd people he meets are also charming in their own ways.

Because his mother is dying and his father is off in some other part of the world, he and his brother are split up. Ingemar goes to live with relatives in another town. There he must learn the meaning of the strange things that happen in life. He develops a simple but profound philosophy: no matter what happens to him, “It could have been worse.” He even has to deal with the thought that he was not wanted by his parents. He distances himself from the pain in his life by comparing his predicaments to things he has heard about in the great, strange world beyond the little town where he lives.

This is an amusing, quaint film that shows us that life goes on no matter how difficult and hurtful it seems. Not only that, we can smile like the little boy in the face of all adversity. 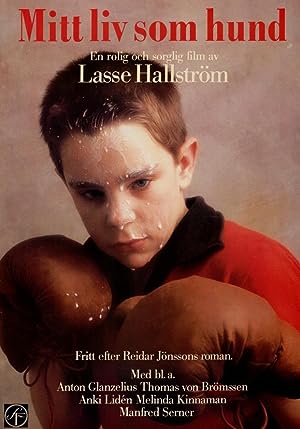 My Life as a Dog (1985)
101 min|Drama, Comedy|01 May 1987
7.6Rating: 7.6 / 10 from 16,983 users
A boy and his brother don't get along well. In order to let their ill mother rest, they're separated and sent each one with their relatives.
Director: Lasse Hallström
Creator: Reidar Jönsson (novel), Lasse Hallström, Reidar Jönsson, Brasse Brännström, Per Berglund
Actors: Anton Glanzelius, Tomas von Brömssen, Anki Lidén, Melinda Kinnaman