Home » Non-English with Subtitles » My mother 2004 with English Subtitles

My mother 2004 with English Subtitles

Pierre, a youth, comes from his grandmother’s in France to stay with his parents in the Canary Islands. His father talks oddly about his lost youth and leaves abruptly for France. Mom promises to take Pierre to a nightclub, remarking that people will think he’s her lover. He prays. His father dies in France, and his mother wants him to empty his father’s office; Pierre finds it full of pornography. His mother takes him in tow into a night world without morality, a world of sexual exploitation, exhibitionism, and wildness. What will Pierre make of this, and what, ultimately, will he make of his mother?

Remarkably evocative and accurate portrayal of a work by Geroge Bataille. Not having read the particular book it was based on yet it certainly ties in the imagery and methodologies used in other novels of his I have read. Challenging, stylish and original. Probably the most successful adaptation I have seen of a challenging work (with the proviso of not having read the actual work and citing familiarity with his oeuvre). Arguably some of the sex in the middle of the film is superfluous but it soon gets darker and touches upon some of Bataille’s more extreme ideas re: religion, sex and death. If an attempt were to be made to film Story of the Eye, the same production team would seem like the ideal choice. Indeed, maybe this will start a trend in filming the fiction /screenplays based on the ideas of others like Foucault / Barthes, etc. That could prove very interesting. 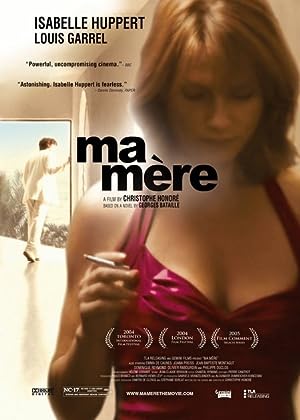 1 review for My mother 2004 with English Subtitles