My Queen Karo 2009 with English Subtitles

Nine-year-old Karo grows up with her parents in an Amsterdam commune in the Seventies. She leads a carefree existence in this utopia-for-adults. Everything is shared in the squat, but not everyone is able to honor these ideals. Karo gets confused because of the internal conflicts that start to divide the group. Karo slowly realizes that nothing can stay the same forever.

When I saw this movie on a Friday night in Brussels’s largest cinema, the theatre was almost empty. We were there with about eight or ten other people. It’s clear that My Queen Karo is not a crowd pleaser. That’s a pity, because this film is well-written, poetic and beautifully filmed. The subject, the life of a young family in a squatter’s community in Amsterdam in the seventies, is interesting enough. But the thing that makes this film something special is the point of view: the story is seen through the eyes of a young child, who doesn’t really understand everything that is happening around her. The way this dreamy, naive child reacts to the conflicts around her (including those between her parents), is what makes this film stand out. Nevertheless, there were a few things I didn’t like. The fact that the father is Dutch-speaking while the mother speaks French is a nice statement about bilingual Belgium (their home country, as well as director Van den Berghe’s) but doesn’t serve any purpose in the film. I suspect that the possibility to obtain financing from the French-speaking government played a part in the decision to make the film bilingual. In any case: Deborah François, who plays the mother, is a joy to watch. Matthias Schoenaerts on the other hand (the father) is sometimes over-acting. 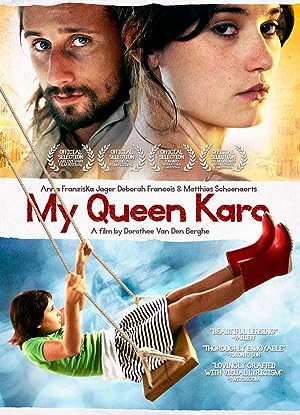 9 reviews for My Queen Karo 2009 with English Subtitles