My Straight Son 2012 with English Subtitles

The story of Diego, a young and successful photographer that lives in the glamorous world of fashion, shallowness and excess. A tragic accident turns his world around; his partner is now in a coma. Unexpectedly, and right at this terrible time, Diego must take care of his son, Armando. Now, both of them have to adapt to each other; Armando to the unknown, homosexual world of his father, and Diego to the closed attitude of his teenage son.

I didn’t really plan to see the film. A group of friends asked me to go and I agreed, so my expectations were really low. The movie ended up surprising me.

Azul y no tan Rosa might be one of the best Venezuelan films ever made. The story may be a bit too melodramatic, but it says a lot about tolerance and family relationships. The acting, even though not great, is decent. There are laughs, tender moments, sad moments and the movie is really nice to look at because of the locations.

I recommend this movie to anyone who thinks Venezuelan cinema is trash (which is not). It won the Goya Award for best Ibero-American Film, which represented a big win for Venezuela too. 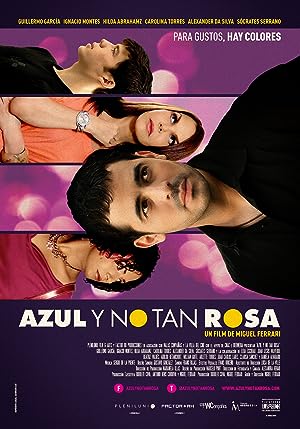 My Straight Son (2012)
114 min|Drama, Romance|27 Nov 2012
7.5Rating: 7.5 / 10 from 1,663 users
The story of Diego, a young and successful photographer that lives in the glamorous world of fashion, shallowness and excess. A tragic accident turns his world around; his partner is now in…
Director: Miguel Ferrari
Creator: Miguel Ferrari
Actors: Guillermo Garcia, Ignacio Montes, Hilda Abrahamz, Carolina Torres