Brian Lackey is determined to discover what happened during an amnesia blackout when he was eight years old, and then later woke with a bloody nose. He believes he was abducted by aliens, and N. McCormick, a fellow player on Brian’s childhood baseball team, may be the key as to exactly what happened that night. As Brian searches for the truth and tries to track him down, Neil McCormick takes up hustling and moves to New York, in attempts to forget childhood memories that haunt him. Together, the two of them uncover the terrible truth of the scars they share.

As a movie lover and social worker, I was really moved throughout this film – for most of this film – by the subject matter and by the powerful portrayal and production of these characters. Overall, this is a highly rated movie and one can only wonder at the mentality of persons in Australia who pushed for the banning of this film. This is a realistic account of the affects on the victims of child abuse and tells a compelling story of their plight. But don’t expect a happy ending; there is some resolution but you know the battle continues and their struggle to overcome will go on. (I’m getting emotional again just thinking about the last scene.) I work with young people (15-25) who have been abused, often by their own parents, and placed into the care system. However, I have had clients who have then been abused in care as well. It is hard to reconcile such young people but gaining justice is quite central, as is a belief they are accepted and worthwhile human beings. Because they may have been sexually aroused during the abuse they can often feel guilty and to blame. They often internalise these feelings and depending on their personalities they will implode against themselves (drugs etc) and/or become de-sensitised to certain feelings and take risks. The boys in this film portray these two dichotomies and they do it very well. 10 stars. 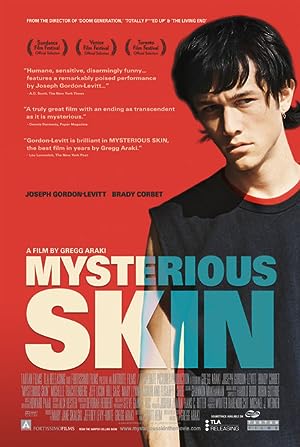 Be the first to review “Mysterious Skin 2004” Cancel reply