Home » Non-English with Subtitles » Neighbour No. 13 (2005) with English Subtitles

Jxc3xbbzxc3xb4 Murasaki is a boy miscast in his classroom, being frequently abused, tortured, beaten and humiliated by the bully Txc3xb4ru Akai and his gang of juvenile punks. After years of repression, rejection and fear without facing Akai, he develops a psychopathic dual personality with a violent alter-ego. While living in the apartment 13 of a tenement building, he becomes unable to control his violent dark personality, who plots an evil revenge against his upper floor neighbor Akai and his family.

I have just watched the film, and there is not much I can say without spoiling some of it for you. Let’s just say that is a revenge film, and like many Japanese films of its type, insanity plays a part. The film starts when a young man, Juzo, gets a job at a construction company. We learn that Juzo spent much of his school years hiding from bullies (and from the introduction, also being tortured in some VERY shocking ways). The cruel attacks by his supervisor at the site begin to affect Juzo, bringing more and more of his school memories to the surface, and the desire for REVENGE.

*The Neighbour Number 13 (Rinjin jusan go)* That’s all I can say really, as I don’t want to spoil or diffuse this film. I am pretty sure if you do a search you will find a couple of reviews on the boards, from the cinema release, but beware of spoilers: the story is everything in this film, there are few twists and turns, and some sections will leave you stumped.

I liked this film: it is very stylishly shot, and the use of colour is fantastic in some scenes. I have never read the original comic that this film is based on, but I can only assume that the film’s many lapses into the surreal are faithful to the source: there is even an animated section of the film, and identifying the reality in this film is not always an easy thing to do.

There are some very still sequences that reminded me of Kitano’s films (Hanabi or Brother in particular), and some of the more insane scenes are definitely like adding a pinch of Miike to the mix. While there is a fair bit of violence in the film, most of it occures offscreen, though the fate of one character is shown particularly graphically.

One aspect of the film that I am sure is from the source material, as it seems to be a very manga thing to do, is the depiction of some of the more grosser things in life, ie: bodily excretions, both liquid and solid are shown in this film, when I am sure few Hollywood films would not. It’s nothing too graphic, but it was enough to make me squeal “Ewww gross!” like little girl. tongue.gif So in the end, I quite enjoyed this film. It is stylish, tense and atmospheric. This director’s style, reminds me in some ways of Kitano’s older work, in that I felt sometimes that was just following the characters around. Some scenes are just not trimmed down to keep the action flowing, and I like that. Like I said, there are some quiet moments, but they are often filmed in a kind of detached manner, and filled with tension, possibly reminiscent of Kiyoshi Kurosawa.

The Neighbour Number 13 is a film that would be best watched with friends, and discussed over SEVERAL pints of beer – or at least Cokes and Gummi bears tongue.gif While it isn’t amazing, it is very interesting and looks fantastic. If you have bought all of your essentials and you are looking for a sidedish, I can fully recommend this film. 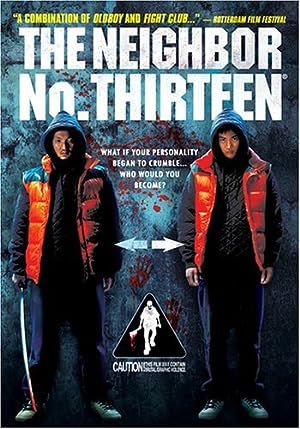 Be the first to review “Neighbour No. 13 (2005) with English Subtitles” Cancel reply