It’s the first day of school in Ireland for Joseph, an African lad of about ten or 12. The teacher introduces him to the class, he sits, and as the day progresses he remembers moments of his schooling back home. Two of the boys in class start to tease and pick on him; he’s stoic, ignoring them at first. He’s defended by one of the girls in class. Recess approaches and one of the lads tells Joseph to watch out. How will the confrontation play out?

Director Steph Green’s “Newboy” is a classic new-kid-on-the-block, fish-out-of-water narrative that comes alive through Cinematographer PJ Dillon’s clean camera work and scene set-ups that literally catches both the vibrant warmth of Joseph’s African homeland (and yet set against a chilling coldness of another sort) and the cold, grayness of Ireland (and yet a peculiar kind of warmth and care) which underscores the metaphor of an initial cultural clash. The expressiveness and humor of the brilliant and mainly child actors is stellar and it’s they who will charm you and warm your heart.

Given the timelessness of the narrative (the success of the remake of “The Karate Kid” starring Jaden Smith comes to mind) this sort of 11 min. short should be the appetizer to films at the cinema for films geared to children, adults and those on their way to adulthood. This would be especially true in North American cinemas where it’s difficult for films outside of certain cities to see great little films from overseas. 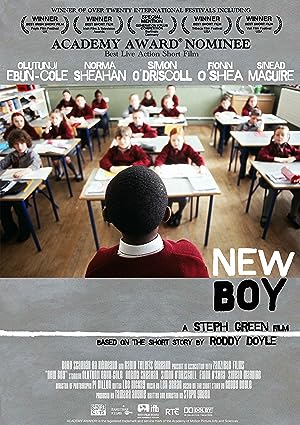 Be the first to review “New Boy 2007” Cancel reply