At late eighties, a boy has been found in mountains of Bosnia and Herzegovina. Nobody found out how he came in wild, nor if animals fed and raised him.

This is a film inspired by actual events and has indeed closely followed the ‘real’story of a feral child found somewhere in rural Bosnia. A child is found living among wolves, nobody knew who he is, his name, family, background. He could have wandered off and gotten lost never to be found, he could have been left there, who knows. Anyway, the child is sent to Belgrade, Serbia (1988 it was still Yugoslavia) to be examined and placed him into orphanage.

He even got a name – a Muslim name, Haris (cause that part of Bosnia is mostly populated by Muslims) and this seemingly tiny and unimportant detail will somewhat determine his faith.

Haris does not seem to walk, talk or understand language, he acts like a wolf and keeps to himself, pretty much isolated from other kids. The teachers at the institution try to reach out and get through him, with little success. But an older boy, Zika grows interested in poor Haris and starts tutoring and protecting him from other children’s cruel jokes.

Big portion of film is dedicated to his time spent at the orphanage, following his progress and relationships with Zika and the rest of the local kids… Haris (nick-named Pucke) gets really attached to older boy, but the boy is troubled, with abusive parent and pretty much in ‘n out of the orphanage. Zika’s faith will pretty much mean a big turning point for Haris, who goes through big change, socializes as much as possible in a couple of year’s span, while he was there.

But, something changes and interrupts Pucke’s progress. The civil was breaks in former Yugoslavia, war in Bosnia – and Haris gets called to come back to the place where he was found. What’s more, some orphans who lost their homes, a Bosnian Serbs, now immigrants are sent to Haris’ orphanage. And having heard his name, they developed and instant pick on him, cause he is ‘enemy’. He is Bosnian citizen and need be back home…so authorities in Serbia had no other choice but to get him ‘shipped’ out.

Drama is very slow building at first, as we follow this 10-12 year old boy though his difficult socialization, much screen time is used to depict the orphanage and its hierarchy. Production and cinematography are excellent, as are the roles, especially young Denis Muric (Haris) who shines in a demanding part in which he doesn’t speak much but his body language is exquisite. His face shows every complicated emotion the role demands and more… very talented young actor.

As you can imagine, with all things said here, and some left to find out yourselves, this is not a happy tale, cause there’s a lot of grief, loss and not enough sense of belonging, no friends, no family for the protagonist of this film.

No One’s Child could have easily slipped into preachiness, sappiness, etc. It’s nothing of the sort. It uses a peculiar feral child story and places it into many contexts, a war context being the most hard hitting of them all. Unfortunately, sometimes you’re better off society and people. Especially those who call the shots in a sad and messed up world. 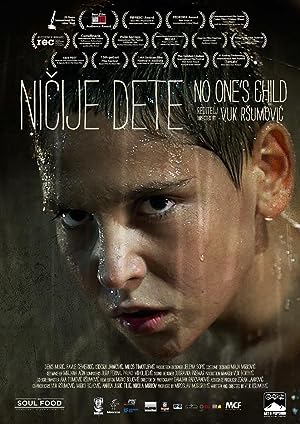 No One's Child (2014)
95 min|Drama|08 Apr 2015
7.6Rating: 7.6 / 10 from 1,314 users
At late eighties, a boy has been found in mountains of Bosnia and Herzegovina. Nobody found out how he came in wild, nor if animals fed and raised him.
Director: Vuk Rsumovic
Creator: Vuk Rsumovic, Ana Tomovic
Actors: Denis Muric, Milos Timotijevic, Pavle Cemerikic, Isidora Jankovic