Nico And Dani 2000 with English Subtitles

Coming of age, on a Barcelona beach, during an eventful week: Nico arrives at Dani’s for part of the summer. Dani’s parents are away, Nico is keen to lose his virginity, and Dani, who’s been Nico’s friend since grammar school, wants time only with Nico. Dani’s plans to hunt and fish are waylaid when Nico catches the eye of Elena and her cousin Berta. He wants to go to the beach with the girls, cook them dinner, and make love to at least one of them. Dani wants social and physical contact with Nico. Watching from a short distance are Sonia, Dani’s tutor, and Julian, a gay writer, who picks up Dani’s vibes. Can Nico and Dani sort out friendship as well as their mixed desires?

I completely missed the boat on this one – KRAMPACK (a.k.a. NICO & DANI) is an excellent film. To temporarily ditch any pretense of objectivity, this was very nostalgic – my adolescence was a good bit more modest, but the experiences and conversations (even the summertime setting) at many points through this film hit close to home. I won’t rehash the plot, which is well-covered by previous reviewers here, but I will say that the film really gets the mix of unease and anticipation right in depicting the evolving relationship between Nico & Dani. On this front, it’s a five-star gay-themed drama.

The performances are quite expressive and naturalistic – no movie-of-the-week feelgood speeches appear here, and none are needed. The slightest changes in expression (contrast Nico’s responses to Dani through the first 2/3 of the film, to his responses during the last 20 minutes or so) convey great warmth and understanding, giving him the ability to reaffirm his friendship with Dani (in a ‘positive’ statement greater than any speech) even as they both understand by film’s end that the dynamic of their friendship won’t ever be quite the same.

On this note the film does have something to offer anyone – it’s universal without getting saccharine, and deeply committed to the humanity of its’ characters. There aren’t any complex philosophical or political undercurrents here, but none are needed – the respect and graceful treatment afforded to two ultimately different characters are more than adequate. A fine flick. 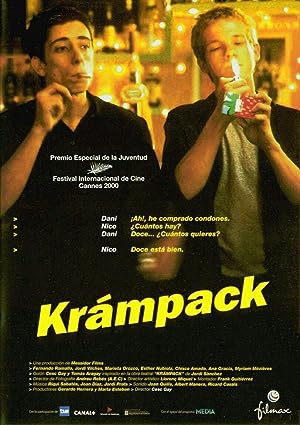 2 reviews for Nico And Dani 2000 with English Subtitles