Based on the popular novel for young adults by Frank Sacks, this heart-warming drama concerns Billy Hastings, an 11-year-old boy whose life is shattered after his leg is permanently damaged by a drunk driver. Billy and his mother Julie move to a new town in hopes of escaping the bad memories of the accident. Not long after they arrive, they visit a threadbare circus, where they discover a neglected horse. Feeling sorry for the animal, they arrange to take it home, only to discover that the horse is pregnant. That’s the least of their surprises, though; the horse shortly gives birth to a unicorn, which appears to have magical powers.

Billy (Kevin Zegers) and his widowed mother, Julie (Anne Archer) have moved to the western United States to start their lives over. This is important especially to Julie, who needs to get away from the memories of what she has lost. Billy, however, is not very happy at the moment, for going to a new school is difficult. You see, Billy has a disability, one of his legs works very poorly and running is not possible. It also makes him a point of curiosity as he shuffles to classes. Only Carolyn (Elisha Cuthbert) extends the hand of true friendship to Billy. On the way home from school, one day, Billy comes upon a tent with a sign of “unusual animals”. Its a put-on, as the pony Billy finds inside has a “fake” unicorn horn tied onto his head. When the owner can’t make the pony obey, he beats the little animal, right in front of the young boy. Stunned, Billy rescues the pony and takes her home. Julie is aghast, as they have little money for the creature but she relents. All too soon, they learn the pony is expecting a baby. When the foal arrives, it turns out to be a REAL UNICORN. As Julie is being courted by a local law officer named Tom (Michael Ontkean) she is away when a mountain lion kills the pony-mother. But, the foal, named Nico, grows at a rapid place and starts to change the yard into a replica of the Garden of Eden, for the folklore says that’s where the creatures originated. But, rumors abound that a unicorn is in the area and everyone wants to exploit the animal if found. Will Billy find a way to help Nico escape the clutches of the wrong hands? This is a film children will enjoy, as it is visually nice and most everyone loves unicorns. But, the plot has some flaws and nonsensical elements, preventing it from being truly great. A Canadian movie, the cast is nice, as Archer always does a fine job and Ontkean, Zegers, Cuthbert, and all of the rest play their parts well. The scenery is also lovely, with mountains and such. Therefore, if your family has run out of ideas for the next kids-and-kin film night, this flick would entertain the clan for an evening. 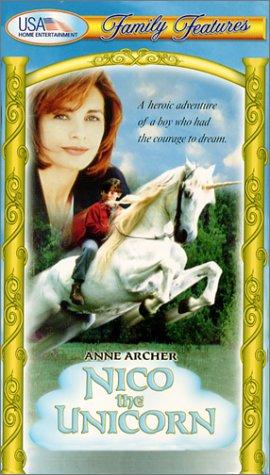 Be the first to review “Nico the Unicorn 1998” Cancel reply