Home » Non-English with Subtitles » Nobody Knows 2004 with English Subtitles

Nobody Knows 2004 with English Subtitles

In Tokyo, the reckless single mother Keiko moves to a small apartment with her twelve years old son Akira Fukushima and hidden in the luggage, his siblings Shigeru and Yuki. Kyoko, another sibling arrives later by train. The children have different fathers and do not have schooling, but they have a happy life with their mother. When Keiko finds a new boyfriend, she leaves the children alone, giving some money to Akira and assigning him to take care of his siblings. When the money runs out, Akira manages to find means to survive with the youngsters without power supply, gas or water at home, and with the landlord asking for the rent.

“Children can not choose their parents” This was what came into my mind after I saw this movie.

She had met several men and had 5 children, two boys and three girls, who were not registered and hidden from other people. When the second boy died of sick, she hid the corps in the closet. While she works in a department store, the eldest son took care of three sisters. When the eldest son was 14, she went out to live with her new man, who was 16 years older than her. She gave the eldest son her address. When the children were protected by the police half a year later, a girl was dead, and the two were debilitated, as they were confined in a room and poorly fed. The girls were 3 and 2 y/o and still used diapers, but they were changed only once every day. It is reported that the eldest boy blamed himself for not being able to take good care of his sisters, instead of blaming his mother…

Compared to the real story, the movie is less miserable. In the movie, even the little boy and girl look normal and pretty, but in the real story they were very poorly developed. But it was still more than enough to surprise me. What a mother! In a conversation with the eldest boy, she says “May I not become happy?” She acts on this thought, without thinking of the same right about her children. Her childish lisping talk describes her immaturity. And of course, men were more guilty. Sadly, children can not choose their parents.

Every child acted amazingly well, very natural. Particularly, the eyes of the eldest boy, Akira, are very impressive. The eyes tell many things from their miserable life. 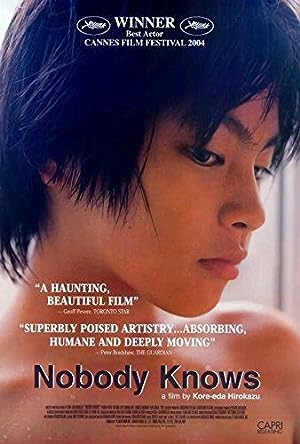