In 1970, near the World Cup, Daniel Stern and his wife Miriam leaves Belo Horizonte in a hurry and scared with their ten years old son Mauro in their Volkswagen. While traveling to São Paulo, the couple explains Mauro that they will travel on vacation and will leave Mauro with his grandfather Mótel. Daniel promises to return before the first game of the Brazilian National Soccer Team in the Cup. The boy is left in Bom Retiro, a Jewish and Italian neighborhood, and waits for Mótel in front of his apartment. When the next door neighbor Shlomo arrives, he tells the boy that Mótel had just had a heart attack and died. Alone and without knowing where his parents are, the boy is lodged by Shlomo and the Jewish community. Through the young neighbor Hanna, Mauro makes new friends, cheers for the Brazilian team and sees the movement of the police and militaries on the streets while waiting for his parents.

O Ano em Que Meus Pais Saíram de Férias (THE YEAR MY PARENTS WENT ON VACATION) is an amazing little film from Brazil written by Adriana Falcão and Claudio Galperin and directed with panache by Cao Hamberger. It tackles many important issues (political upheaval, religion, ghettos, soccer, aging and more) while telling a very tender story about a young lad forced into a change of life that builds his character and his appreciation for the global community. It works on every level.

The year is 1970, the place is São Paulo during the World Cup Soccer Games, and we meet the young Mauro (Michel Joelsas) as he is swept away from his home by his frantic parents to live in São Paulo with his grandfather: his parents tell him they are going on ‘vacation’ while in reality they are escaping the dictatorial ‘disappearances’ that challenged the Brazil of the time. The grandfather lives in the Jewish ghetto and Mauro soon discovers that his would be host has just died. He meets the adjoining neighbor, grumpy old Shlomo (Germano Haiut), who begrudgingly takes Mauro in and allows him to pursue his obsession with soccer. The story winds through the disparities of Jewish life and the governmental changes that are disrupting the flow of this important year for Brazil (there are many film clips of the famous player Pelé which add to the tenor of the story), and as Mauro makes friends with a little girl Hanna (Daniela Piepszyk) the two children are confronted with the realities of political strife and the glories of Brazil’s World Cup. By keeping the narrative (in Portuguese, Yiddish and German) to a minimum the beauty of viewing the world and its incongruities through the eyes of children becomes even more touching.

This is one of those films that allows us a vantage of longstanding problems and gives us a fresh view – a factor that helps our understanding of traumas of the history and awareness of similar traumas of the present. Hamberger delivers it with tenderness and is greatly assisted by the artistic cinematography of Adriano Goldman and the musical score by Beto Villares. It is a film well worth seeing at least once! 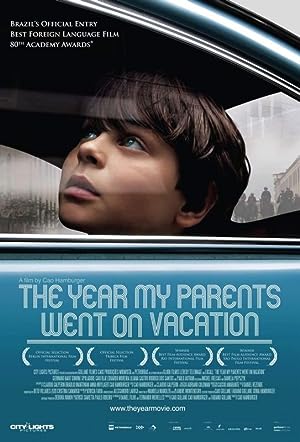