Survivors of a feral flesh-eating clan are chowing their way through the locals. Amy Halbard and Claire Carey strive to survive their abduction by the cannibals and save their children. A subplot involving Claire’s despicable husband, Steven, gives an opportunity to cleverly compare predatory civilized folk to the appetite-driven primitives.

This is probably how a film by Ed Wood would look nowadays, if he would have made his films at modern standards! Not that there are many technical mistakes, but it takes about 20 minutes to get used to the wooden-handed style of direction and poor acting. If you can stand through that so far, and don’t mind very dumb policemen in a movie, the film actually delivers enough gory scenes which might be quite enjoyable for fans of the genre.

Funny was that the Japanese DVD had subtitles for the dialogs between the cannibals, I doubt that there are some in the original version.

Except the taboo of the involvement of children, this film based on Jack Ketchum’s novel lacks the intensity of “The Girl Next Door” which I liked much better! 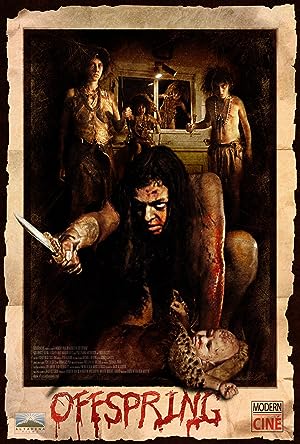 Offspring (2009)
79 min|Horror|28 Aug 2009
4.8Rating: 4.8 / 10 from 2,327 users
Against the backdrop of grisly murders and child abductions, a clan of cannibalistic savages which plague the North-east Coast since 1858, is after an unsuspecting family and their innocent baby girl. Do they have what it takes to survive?
Director: Andrew van den Houten
Creator: Jack Ketchum (screenplay), Jack Ketchum (based upon the book by)
Actors: Jessica Butler, Kelly Carey, Holter Graham, T.J. Graye

Be the first to review “Offspring 2009” Cancel reply