Musical adaptation of Charles Dickens’s classic tale of an orphan who runs away from the orphanage and hooks up with a group of boys trained to be pickpockets by an elderly mentor.

I took part in a little mini production of this when I was a bout 8 at school and my mum bought the video for me. I’ve loved it ever since!! When I was younger, it was the songs and spectacular dance sequences that I enjoyed but since I’ve watched it when I got older, I appreciate more the fantastic acting and character portrayal. Oliver Reed and Ron Moody were brilliant. I can’t imagine anyone else playing Bill Sykes or Fagin. Shani Wallis’ Nancy if the best character for me. She put up with so much for those boys, I think she’s such a strong character and her final scene when… Well, you know… Always makes me cry! Best musical in my opinion of all time. It’s lasted all this time, it will live on for many more years to come! 11/10!! 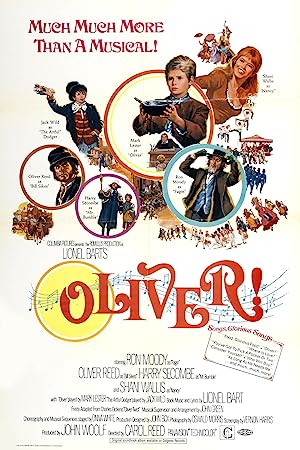