One Night in Oslo 2014 with English Subtitles

On the Eve of The Norwegian Day of Liberation – a whole nation is gearing up to get drunk and disorderly. Sam and Amir, two 15 year-old boys, have decided their night is going to be an epic. The boys have known each other almost all their lives, and are closer than brothers. But the next 24 hours will test the bonds of brotherhood. Sam has fallen for Thea, Amir’s ex-girlfriend. He knows he has to tell Amir, but doesn’t know how. When Sam finally summons up the courage to confess, Amir’s reaction is far worse than he could ever have imagined. The long night turns into chaos as Amir embarks on a revenge-fuelled journey of violence and destruction. Can Sam and Amir forgive each other or is this the end of their friendship?

One night in Oslo (orginally “Natt til 17.” which translates into “Night to the 17th”) is Eirik Svenssons second feature after the critically acclaimed “Must have been love” originally “En som deg”). This is a coming-of-age story about youth in revolt. Youth as we know them from films we’ve seen before, when things are getting out of hand.

We meet a gang of 15-year-olds in Oslo, boys from the East poorer side and girls from the richer West side of Norway’s capitol. We meet naive, well meaning good parents, which really knows what’s going on, still they don’t believe this is what’s happening around their little cute ones.

Somali Sam and his gang of 5, consists of 5 different nationalities, and his best friend Amir is the Palestinian which came to Norway only 5 years ago. They are both in love with the same girl, Thea. A love triangle of the classic kind. On the night before the Norwegian national day, the 17th of May, they attend a party at Thea’s, which doesn’t at all go the way it should.

I found the film very realistic. Of course, it’s not every youth party that goes wrong, but still this happens more than we like to think. The 14-15 year old actors are non-professionals doing a great job. They have been told to improvise, something which probably has lead to the good performances. The credibility is good, and the plot is also enough to drive the story.

A success at the Norwegian cinemas, but still I think a lot of the audience above 18 has bashed it here at IMDb when it comes to the score. No reason for this, as this is a story which depicts very well what may happen with young teenagers when they come out of control. More so some years ago than now, I guess, as this kind of stories makes me remember the traditions of riot on this very night, with youngsters going berserk. Why this tradition is lost, I don’t know, but that we could call it good riddance, that’s out of question. Quite possibly this film will get more acclaim by an older audience than the generation it depicts.

Casting is well done out of hundreds of kids at Oslo schools, and that a lot is put into it, shows that Thea’s mother is her real mother, which is spotted down to the dialect she speaks. This helps much on credibility. We’ve really seen young feelings depicted as well as this, without getting boring, flat, embarrassing or staged. Quite astonishingly well made I would say. Even though they are not all all likable the film through, the film maker manages to establish sympathy for them all.

The young film maker Eirik Svensson has had a good hand on the film making here as well as with the first feature. Outexamined from the Norwegian film school in 2010, and already a two time feature film maker with good films, is remarkable. These two features where made at the same time, so which one was going to be the first out in the cinemas could have gone either way. Still it’s promising.

Not flawless, by far. But good, and believable. So much that I think it deserves recognition for what it is. Could easily end up as a “document” for the age we’re in.

The film should be a good watch for parents, as well as for youngsters. It deals with problems like drinking, home-alone-partying, drugs, youth love, gang mentality, parenthood, theft and violence in a way that should serve as a good warning to naive parents as well as others blind to cute teenagers. As of such, it’s very recommended. 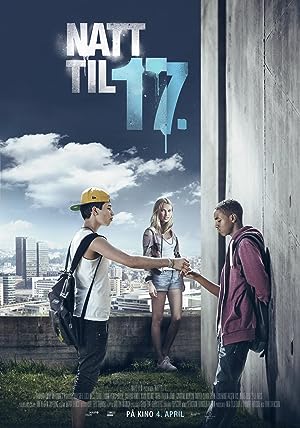 One Night in Oslo (2014)
83 min|Drama, Romance|04 Apr 2014
5.4Rating: 5.4 / 10 from 461 users
On the Eve of The Norwegian Day of Liberation – a whole nation is gearing up to get drunk and disorderly. Sam and Amir, two 15 year-old boys, have decided their night is going to be an epic…
Director: Eirik Svensson
Creator: Sebastian Torngren Wartin
Actors: Samakab Omar, Mohammed Alghoul, Thea Sofie Loch Næss, Burhan Ahmed