A boy wakes up below a cliff, bloodied, with a gun in his hand, and chained to a man who lies beside him… He stresses hard to remember what happened, and soon the puzzle of the days events come back to him. The story begins.

A teenager wakes up near a cliff, injured and unable to remember how he got there. He is chained to a man in a suit and there is a gun gaffer-taped to each of their hands. An unknown person soon sends them shocking instructions of what they must do next, as the horror of the situation unfolds with nail-biting consequences.

Left Films are a UK distribution firm known for championing and releasing indie and small time British and Irish horror features. Many of the titles they release would otherwise be overlooked and are usually made by people who are low on cash but high on the love of the genre. ONUS, an upcoming Left Films release, is no different.

ONUS is a movie that is rich in regards of it’s acting ability and the direction/writing of George Clarke although it has no budget. It cost £500 altogether to make. Most of it is filmed outside, in some woods or in other public spaces. It is filmed during the day, no doubt to save on hiring lighting equipment. And outside of some sound effects very little happens in way of SFX.

The acting is given centre stage due to this and it is perhaps wise. The first half of the feature excels here as the two characters of Mr Andrews (Robert Render) and Keiran (Anthony Boyle) are the only people that appear on screen. Waking in the woods, chained to each other and both with a gun strapped to a hand they spend nearly 40 minutes working out what is going on. The mixture of youth (Boyle) and wisdom (Render) is a nice display of new and old talent. The situation, too, adds to the value of what is on offer. Why are they chained together? Why do they each have a gun? Will either use their weapon?

Around 40 minutes into the run time the story takes a huge shift and almost feels like a different movie at first. While it is rewarding the earlier ‘two hander’ of Andrews/Keiran would have been worthy of the entire run time. Sound is also a problem here, the audio quality isn’t as clear as the previous ‘chapter’ of ONUS.

Clarke is a director that has made low/no budget works before, such as Blood Harvest (previously reviewed on Infernal Cinema). His passion and devotion to film making definitely far exceeds the tiny budgets his films use.

Verdict.
No budget equals no problem for ONUS. With a good premise and some strong acting it is a fine effort. 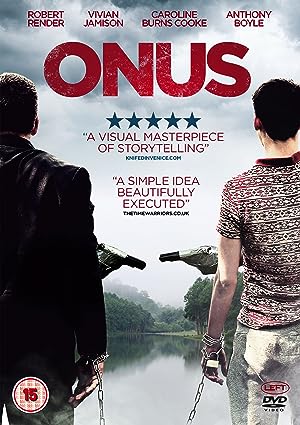 Onus (2016)
98 min|Drama, Mystery, Thriller|26 Dec 2016
2.8Rating: 2.8 / 10 from 106 users
A boy wakes up below a cliff, bloodied, with a gun in his hand, and chained to a man who lies beside him… He stresses hard to remember what happened, and soon the puzzle of the days events come back to him. The story begins.
Director: George Clarke
Creator: Anthony Boyle (additional material), George Clarke (head writer), George Clarke, Robert Render
Actors: Robert Render, Anthony Boyle, Kenny Thompson, Leo Clarke

Be the first to review “Onus 2016” Cancel reply